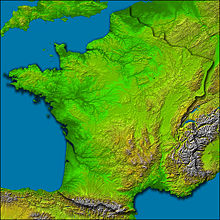 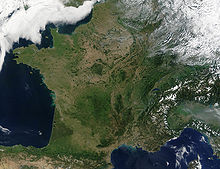 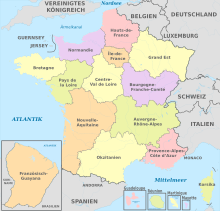 As an intercontinental country, France is located on several continents.

The France métropolitaine , the motherland, is located in western Europe , bordering the Bay of Biscay and the English Channel , between Belgium in the north and Spain , Andorra in the south, southeast of the UK ; bordered in the southeast by the Mediterranean Sea and in the east by Italy , Switzerland , Germany and Luxembourg . The overseas territories are located in South America ( French Guiana ), in the Atlantic, Pacific and Indian Oceans (various areas in each case) and in the Antarctic ( Adélieland , claims exposed ).

For the area of ​​France in Europe, i.e. H. with Corsica and the other islands in Europe, but without the overseas territories , different numbers are given: The statistical office of France Insee names on the one hand (rounded) 552,000 km², on the other hand it adds the area of ​​the regions only to (rounded) 544,000 km², the The German Foreign Office names 543,965 km² with the latter number, whereas the Federal Statistical Office names 643,801 km² for the entire French national territory, which results in an area in Europe of (rounded) 555,800 km² by deducting 88,000 km² for the overseas territories. France is thus the largest state in Western Europe in terms of area and, as an intercontinental state with overseas departments, the second largest state in Europe after Russia .

See the list of French port cities / towns with commercial ports in the sequence of the coastline from north to west or south, etc.

The main rivers and cities in metropolitan France

The main rivers in France:

Most of the European metropolitan area lies in the temperate climate zone, the southeast is already subject to the Mediterranean climate. While there are mild, rainy winters and hot, dry summers, the climate in most of France is dependent on location and relief. Overall, the French climate is relatively mild almost everywhere. The annual average temperature is between 10 ° C (north, Lorraine , Jura , in the Alps also below) and 16 ° C (Mediterranean coast, in Corsica also above). The precipitation falls below 600 mm in the Paris basin and on some coastal strips of the Mediterranean Sea, the driest place is Colmar in Alsace with under 600 mm. Otherwise the values ​​are mostly between 700 and 1000 mm. On the west side of the mountains they are sometimes clearly exceeded (over 1500 mm in the Alps, Cevennes , Jura, Vosges ). This precipitation can be distributed very differently. Less than 60 days of rain in the Rhone Delta are in clear contrast to more than 200 days in the Orne (Normandy). According to the climatic zone, the duration of sunshine is highest in the Mediterranean area, followed by the Atlantic coast . The fewest hours of sun are covered by a wide strip from Brittany to the northern Vosges. Even Paris is one of many cloudy days.

From a climatic point of view, the following large areas can be separated:

The north-west, in particular Normandy and Brittany, is oceanic to very oceanic. The amount of precipitation here in most areas reaches heights of 1000 mm and - especially on the coast and on the weathered sides of the hill countries - more. It's such a westerly winds before, the winters are mild and often free of snow. Summers are relatively cool and humid.

The northeast has much more continental features. In the harsh climates of Lorraine and the Vosges in particular, winters can be very cold, with the plateaus (e.g. the Langres plateau ) being particularly disadvantaged. The river valleys of the Rhine and Moselle, on the other hand, are already suitable for viticulture.

Central France with the Paris Basin and the Loire Valley has relatively little rainfall overall. In terms of hours of sunshine and average temperature, the region is on average, but extreme weather conditions can occur. The 2003 heat wave in Europe was particularly pronounced here because no moderating effects from wind or water were possible over the wide, flat land. In Auxerre , for example, B. the daily maximum temperature 8 days above 40 ° C. Overall, however, the differences between summer and winter temperatures are still significantly smaller than in Eastern Europe, for example; only there can one really speak of a continental climate . The climate in the Massif Central , which can rise to 1800 m, is significantly cooler and more humid .

In the southwest, the Atlantic climate prevails, which is generally humid, but already relatively warm and sunny. Precipitation maximums can be found especially near the Pyrenees . According to E. Neef's classification, the climate on the Atlantic coast is called the “maritime west side climate” and belongs to the moderate climate zone; Due to the influence of the Azores high , the summer is relatively dry there; the maximum precipitation is in autumn or winter.

The Mediterranean area in the southeast is already in the winter rainy climate , so that a different flora already predominates here ( garigue , dry summer forest). Droughts and forest fires can occur in summer . In the catchment area of ​​the Rhône, the Mistral , an occasionally strong, cold, dry north-northwest wind that can also fuel the forest fires, provides cooling .

A high mountain climate can naturally be found in the higher elevations of the Alps and Pyrenees .

→ Main article : List of mountains and elevations in France

France's landscape is dominated by flat plains or rolling hills in the north and west. The rest is mountainous, especially the Pyrenees in the south-west, the Massif Central and the Alps in the south-east.

One of the most serious problems is water pollution - partly from urban sewage - but especially where agriculture is intensive (overfertilization) (especially Brittany ) or water is scarce (Midi - especially the southern massif central). The protection of the coasts (littoral) is an important issue. Air pollution from industry and transport (ozone pollution in strong sunshine) is another problem, (some) forests are damaged by acid rain , but this problem has not been as severe as in Central or Northern Europe. However, the emissions consequences of energy generation are not so clear because of the high proportion of nuclear energy in French electricity production. From this, however, the usual problems of the difficult-to-assess consequences of low-level radiation and unsolved final disposal arise again - in particular because France still functions as a European center of the nuclear industry . This is particularly evident this problem in the case of the French system for the processing of nuclear fuel in La Hague in Normandy. The environmental debate in France is always tied to symbolic large-scale projects - after the (along with the other nuclear power plants) breeder reactor in Creys-Malville in the 1970s, this was the (stopped) project of a reservoir on the upper Loire ( Serre de la Fare ) and, in the 1990s, initially the construction of a tunnel under the Pyrenees (Tunnel du Somport , Vallée d´Aspe ) and a project to connect the Rhine and the Rhone through a large canal. In the new millennium, research into a repository for nuclear waste in deep rock in Bure in southern Lorraine was added.

Geography of modern states in Europe