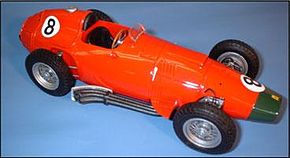 Model of the Ferrari 801

The French Grand Prix took place in Reims in previous years , but was held in Rouen-les-Essarts for the second time since 1952 in 1957 . Reims, however, was the venue for a race that was not part of the world championship. Two world championship races planned in the weeks leading up to the race, the 1957 Belgian Grand Prix and the 1957 Dutch Grand Prix, were canceled due to financial disputes.

In the drivers' standings, Fangio was clearly ahead of the competition, while Sam Hanks in second place and Jim Rathmann in third place were Indianapolis 500 drivers who did not take part in any other Grand Prix of the 1957 Formula 1 season.

Maserati only contested the race with four works cars; in previous races, more cars were often used. The reigning world champion Juan Manuel Fangio , as well as Jean Behra , Harry Schell and Carlos Menditéguy started for the Italian team . Also Maserati's biggest competitor, Ferrari only used four cars. The regular drivers Luigi Musso , Peter Collins , Mike Hawthorn and Maurice Trintignant received a cockpit, Wolfgang Graf Berghe von Trips was forced to pause this race. For the first time, Ferrari only used the new Ferrari 801 for all of its drivers , the Ferrari D50 from last year was no longer used.

All three British teams were also registered for the 1957 French Grand Prix, but changed their respective driver line-ups. At Vanwall , the two regular drivers Stirling Moss and Tony Brooks were not present, so Stuart Lewis-Evans and Roy Salvadori started. Moss was absent due to illness, Brooks due to an injury sustained in an accident at the Le Mans 24 Hours . Salvadori switched from BRM to Vanwall, who thus had a cockpit free. Ron Flockhart's new teammate was Herbert MacKay-Fraser , who was recommended by Colin Chapman and who contested his first and only Formula 1 race. A few days later he had a fatal accident in a Formula 2 Lotus. After Eugenio Castellotti , Alfonso de Portago and Keith Andrews, MacKay-Fraser was the fourth Formula 1 driver to have a fatal accident in 1957.

Cooper relied again on the revolutionary Cooper T43 , the only mid-engine car in the field. Les Leston , who missed out on qualifying for the Monaco Grand Prix , has been replaced by Mike MacDowel . MacDowel, however, received a weaker engine than his teammate Brabham, and for him it was the only Formula 1 Grand Prix of his career.

With Horace Gould , a driver took part in the race with a private Maserati 250F . The field of drivers thus shrank to 15 cars, and all drivers qualified for the race.

No former winner took part in the 1957 French Grand Prix in Rouen-les-Essarts, Ferrari has already won once on this track.

Practice was again dominated by Maserati, the Maserati drivers were more than a second faster than the competition from Ferrari. Fangio and Behra fought for pole position , which Fangio achieved for the second time in the season with a time of 2: 21.5 minutes. For Maserati, it was the third pole position in the third race of the season in which they participated. In addition to the two Maserati drivers, Musso qualified for the front row in the Ferrari. On the second row of the grid, Schell drove in the third Maserati in fourth place ahead of Collins in the second Ferrari in fifth.

Row three included two other Ferrari drivers, Hawthorn and Trintignant, Salvadori finished sixth on the grid in his debut race for Vanwall, making it the fastest driver on a British team. However, he was more than three seconds short of Fangio's time, making Vanwall only a midfield team in this race. Menditeguy in the fourth Maserati and Lewis-Evans in the second Vanwall completed the top 10.

BRM achieved positions eleven and twelve, followed by Cooper's two mid-engined cars in 13th and 15th. Gould, the only driver with private cars in the field qualified in 14th place, the penultimate place.

At the start, Behra managed to overtake Fangio, who in turn also fell behind Musso. In the first lap of the race, Musso also overtook Behra and put the Ferrari in the lead in front of two Maseratis. With Collins and Schell, two more cars from the top Italian teams Ferrari and Maserati followed. In sixth place, MacKay-Fraser worked his way up in the BRM, who had started from twelfth place, overtook several cars and was the best-placed driver of a British car after one race lap.

Fangio had always started relatively badly in the previous races, but often fought his way back to the top of the field. So in this race, too, in the second lap of the race, he overtook Behra, then caught up with Musso and took the lead on lap four, which he did not give up until the end of the race. On lap two, Flockhart had a serious high-speed accident in the BRM, which he survived unscathed and the car was badly damaged. In response to the accident, Flockhart did not take part in any other races of the 1957 Formula 1 season and did not return to the BRM works team until 1959.

In the further course of the race, Collins overtook Behra. Thus, in the Maserati, Fangio led the three Ferraris from Musso, Collins and Hawthorn, who also passed Behra. This order did not change for a large part of the race and was retained until the finish line.

Jack Brabham was eliminated on lap four due to an accident, took over his teammate's car halfway through the race and finished seventh. Trintignant retired on lap 23 with an electrical fault, MacKay-Fraser gave up the race due to a lack of power transmission on his car. So none of the BRM cars reached the destination. The two Vanwall drivers also did not see the checkered flag due to engine failure at Salvadori and defective steering at Stewart-Evans. Menditeguy also retired on lap 30 due to an engine failure.

Of the seven cars that reached the destination, Behra would have reached position five. However, since he suffered an engine failure on the last lap, needed more than seven minutes for this lap, spread a lot of oil on the road and finally pushed the car over the finish line, he was punished with a penalty lap and fell to sixth place, outside the points back. This unusual sentence was decided by the local racing stewards and was not specified in the official Formula 1 regulations, either as a rule or as an associated punishment.

Fangio and Maserati each won their only race in Rouen-les-Essarts and Fangio extended the lead in the drivers' standings to 17 points ahead of the runner-up. Musso scored the first points of the season and improved to fourth place, Behra dropped one position to fifth. The fastest lap of the race, which was rewarded with an additional point, was achieved by Musso in a Ferrari. It was the only fastest race lap of his career and the only one for Ferrari in the 1957 Formula 1 season.

World Cup stand after the race

The first five of the race got 8, 6, 4, 3, 2 points. The driver with the fastest race lap received an additional 1 point. Only the five best results from eight races counted.

Race of the 1957 Automobile World Championship