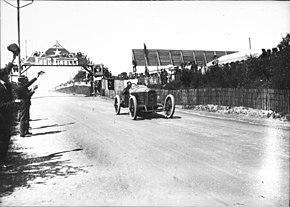 Georges Boillot in the Peugeot, who was leading until just before the end of the race

Impression from the route 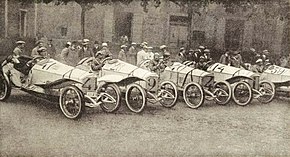 Start of the 1914 French Grand Prix 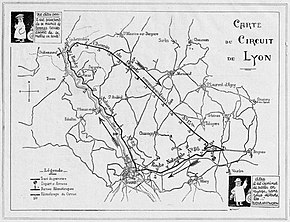 The sixth - according to today's counting method XIV. Grand Prix of France ( XIV Grand Prix de l'Automobile Club de France ) took place on July 4, 1914 on the Circuit de Lyon . The race was held in accordance with the applicable Grand Prix formula (4.5 liter displacement, 1100 kg maximum weight) over 20 laps of 37.629 km, which corresponded to a total distance of 752.58 km.

As in 1908, Christian Friedrich Lautenschlager won in a Mercedes .

In retrospect, the 1914 race has often been called the greatest Grand Prix of all time . In fact, the race was not only the highlight of Grand Prix history because of its dramatic course, but also stood out in many other ways. The external circumstances were already exceptional. The assassination attempt on the Austrian heir to the throne Franz Ferdinand in Sarajevo had taken place only a week earlier , but at the time of the race nobody could really have suspected that in a few weeks all of Europe would be hit by the First World War .

In this tense summer of 1914, after the last really big race of 1908, almost everything that had a reputation in motor racing finally gathered again - including all previous Grand Prix winners. The Automobile Club de France had decided not to hold its Grand Prix in the north of the country for the first time, but instead chose a new, 37.6 km long circuit at Givors , about 20 km from Lyon . The racing formula was also changed again, which completely reshuffled the cards. In the first displacement formula in Grand Prix history, the cylinder capacity was uniformly limited to 4500 cm³ with a maximum car weight of 1100 kg, in order to achieve a high performance density among the participants. A change in the competition mode should also create more tension in the race. For the first time at a Grand Prix, the cars were not sent into the race individually, but in pairs and at intervals of just 30 seconds, a significant step on the way to a real mass start.

After the victories in the two previous years and as a pioneer in engine technology, the clear favorite of the race was of course Peugeot with the great Georges Boillot as the driver, who was generally considered the best racing driver and had meanwhile become a true folk hero in his home country. Despite the death of Paolo Zuccarelli , one of his great leaders, the team around the remaining three "Charlatans" - designer Ernest Henry and the two top drivers Boillot and Goux  - had further developed the car and for the first time equipped it with brakes on all four wheels. In view of the long straight, the rear of the vehicle, including the spare wheels housed there, had been given a particularly aerodynamic fairing. The engines were also modernized again and of course the displacement was reduced to the level allowed by the regulations, whereby the third driver in the team, Victor Rigal , had to be satisfied with a slightly older and less powerful version.

The most promising competitor in the run-up to the race was Delage , Peugeot's longstanding main opponent in the Voiturette races, who had previously had the upper hand at the Indianapolis race . The new Grand Prix model Delage Type S was now also equipped with a DOHC engine , desmodromic valve control and four-wheel brakes. The driver continued to rely on the tried and tested duo Paul Bablot and Albert Guyot , plus the experienced Arthur Duray . But the other manufacturers had also caught up in terms of technology and in some cases even almost caught up with Peugeot. The Sunbeam and Belgian Nagant models were practically Peugeot copies, and another team, Vauxhall , used twin overhead cam engines . The rest of the field of 37 wagons - with the exception of the two wagons from the Swiss manufacturer Pic-Pic with their slide motors - now had  at least OHC motors , and laterally controlled valves had finally had their day. Four-wheel brakes were also found on Fiat and Pic-Pic cars. Many cars also had cranked frames with springs attached below the axles, which made the cars lower and overall also reduced the frontal area.

Above all, the return of Mercedes - after the victories of 1903 and 1908 practically the embodiment of Germany in motor sport - completely changed the character of the race. More than a mere competition between different automobile brands, it also became a battle for national prestige and an expression of the arch rivalry between France and Germany beyond motorsport. As in 1908, Mercedes did without the absolute top technology and instead relied on the proven successful concept of consistent lightweight construction, optimal coordination with the conditions of the track and perfect organization, which generally became the trademark of Mercedes in racing. The most important innovation was the use of four individual steel cylinders with welded-on cooling water jackets and aluminum crankshaft housings, taken over from aircraft engine construction. This measure alone made it possible to halve the engine weight compared to the otherwise common cast iron blocks. The lack of front brakes brought an additional weight advantage, which also had a positive effect on the unsprung masses and thus on the road holding. In extensive test drives, the best gear ratios for the course were determined months before the race and finally Mercedes was the first racing team to introduce a racing strategy in which the drivers were instructed not to wait for a tire damage first, but rather halfway through After the race, it is essential to have a scheduled tire change in order to avoid a greater loss of time overall. Mercedes was also the only racing team that made full use of the permitted number of five cars per team. The driver from 1908, Christian Lautenschlager , and regular driver Otto Salzer were selected as the driver for the cars, which also look extremely classy with their tapered radiators , as well as the experienced French Grand Prix driver Louis Wagner and the Belgian general importer for Mercedes- Wagen, Théodore Pilette . The head of the team, Max Sailer , a young engineer who was completely inexperienced as a driver , drove the last car .

All the prerequisites were therefore in place for a great race that has since been often referred to as the greatest Grand Prix of all time . Ten days before the race was completely sold out and on the day of the race, 300,000 spectators gathered around the 37.6 km long course - a combination of winding passages and an approximately 10 km long almost straight section - that of the 37 participants of 13 teams from six countries had to be lapped twenty times over a total distance of 752.6 km. Right from the start, Mercedes newcomer Max Sailer set an enormous pace, regardless of any signs of wear and tear on his car. Whether he acted out of inexperience or according to a predetermined team tactic, as it is often called in the literature, may remain open, but in this way he managed to lure the competitors out of the reserve early on. In particular, when Sailer passed Boillot, which started 90 seconds before him, during its first pit stop on the fourth lap on the track, it finally became clear that the ambitious Frenchman could only compensate for the mechanical superiority of the Mercedes by driving his car over the limit of the Stressed resilience. It turned out that the alleged advantages of the Peugeot turned into the opposite: the overly sweeping rear fairing with the spare wheels housed in it impaired driving behavior in the bends and the load on the Dunlop tires, which already tended to wear more, was reduced by the four-wheel brakes additionally increased. Boillot had to change tires again on the sixth lap - just when Sailer had to park his car with the engine finally over-revving. Although he was able to maintain the leadership he had just inherited, Lautenschlager, who was always more controlled and steadfast, was now only between half a minute and three minutes behind him. Behind them, Peugeot and Mercedes fought for third place with Goux and Wagner, while Sunbeam, Fiat and especially the disappointing Delage were already further behind. In lap Lautenschlager was delayed longer than expected with his planned tire change, so that Boillot was able to extend his lead even further despite another pit stop. Wagner, however, had in the meantime overtaken Goux, who soon fell behind Salzer. The three Mercedes drivers now continuously increased the pressure on Boillot, who was still in the lead, and Lautenschlager was only 14 seconds behind after the leading Peugeot had stopped again on lap 17. At the start of the following lap he was already in front and the dramatic race reached its tragic climax on the last lap, whose Peugeot, which was overly claimed, was increasingly dismantling itself. In the drama - almost typical for the French - without functioning front brakes and with a steering that had been loosened from its anchoring, he finally had to watch tears of fainting - so it is reported - as the Mercedes drivers drove past his stranded Peugeot to a triple victory. On the last lap of the race, the hopelessly over-revving engine had finally given up with a broken valve. Lautenschlager, who had never seen his French opponent on the track before, drove after a little over seven hours with an overall average of 105.55 km / h with 1:36 minutes ahead of his teammate Wagner and 4:57 minutes ahead of Salzer to the horror of the audience as the winner across the line. Lautenschlager's second victory in his second Grand Prix also meant the end of the “heroic age” in motor racing. Four weeks later there was a war.