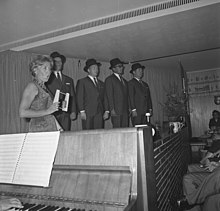 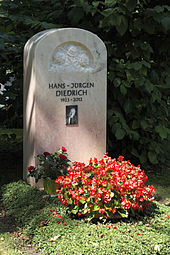 Grave of Hans Jürgen Diedrich in the forest cemetery Obermenzing

After graduating from high school, he was called up for military service in 1943. As a lieutenant in the Panzer Grenadier, he was taken prisoner by the British towards the end of the Second World War , from which he was released in 1946. Diedrich came to the theater through an amateur drama group. He was trained as an actor at the drama school of the Städtische Bühnen in Hamburg-Harburg and made his stage debut there in 1947. Until 1954 he was engaged at the Harburg Theater.

He found cabaret in 1954 through the group rendezvous under Peter Ahrweiler in Hamburg. 1954 to 1955 he was a member of the Kiel troop Die Amnestierten . In 1956, together with Sammy Drechsel , Dieter Hildebrandt , Klaus Havenstein and Ursula Herking, he was one of the founders of the Münchner Lach- und Schießgesellschaft , to which he was associated not only on stage but also as a text writer until 1970.

He then played theater at the Small Comedy Munich , the Comedy Düsseldorf and the Theater am Dom in Cologne . In 1972 he became a member of the Bavarian State Theater, where he also worked as a director. His most important role was that of the cobbler Voigt in Der Hauptmann von Köpenick , which he embodied in Munich in 1980 and on subsequent tours in 165 performances. In 1983 he was appointed Bavarian State Actor . He remained associated with the Bavarian State Theater until 1986.

In addition to his cabaret appearances, he worked in numerous film and television productions . Among them: 1960 On the green beach of the Spree as Ordonanz Jänicke and Der Gauner und der liebe Gott , 1962 Max, the pickpocket , 1963 Order for the child prodigies , 1965 The pious Helene and others.

From 1975 to 1983 he was also known as the voice-over commentator on the comedy series Fathers of Clothes , Men without a nerve and masterful scenes of clothes, and as the voice actor for Fuzzy Q. Jones in the series Westerns from yesterday . In the radio plays and books about Wolfgang Ecke's master detective Balduin Pfiff , he gave his voice to the title role.

Diedrich was supposed to do the role of Homer Simpson as a voice actor , but canceled on the first day of the synchronized recordings because the role was too difficult for him.