Leonberg is a municipality in the Upper Palatinate district of Tirschenreuth and has been a member of the Mitterteich administrative community since 1974 .

The community is located between the towns of Mitterteich , Waldsassen and Tirschenreuth . From the village, which is situated on a slope, there is a broad view over the Wondrebsenke .

Leonberg in its current form was created on April 1st, 1971 through the voluntary amalgamation of the previously independent communities of Leonberg, Großensees and Pfaffenreuth. Leonberg and Großensees were traditionally characterized by agriculture, while the economic focus in Pfaffenreuth was the Bayerland mine . Pebbles were extracted there until the early 1970s .

The municipality of Leonberg has had its own coat of arms since 1980.

Official, heraldic description of the coat of arms

"In silver a growing red dragon with a black hammer in its claws, covered with a lowered blue wavy bar."

Meaning of the coat of arms

The red dragon is the heraldic animal of the Waldsassen monastery . It indicates the relationship between the community and the monastery, which dates back to 1243. The hammer symbolizes mining, mainly operated in Pfaffenreuth, and the blue bar for the river Wondreb , which flows through the municipality. 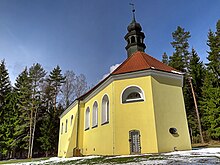 The baroque parish church of St. Leonhard is worth seeing in the village , as is the All Saints Church in the parish of Wernersreuth .

The nature reserve Wondrebaue southeast of Leonberg. The iron hat natural monument is a reminder of the mining industry in Pfaffenreuth. It is near the disused colliery.

The community of Leonberg can be reached via the federal roads 15 and 299 , as well as the A 93 (Mitterteich-Nord and -Süd exits).

Municipalities in the Tirschenreuth district