The title of this article is ambiguous. Further meanings are listed under Liurai (disambiguation) . 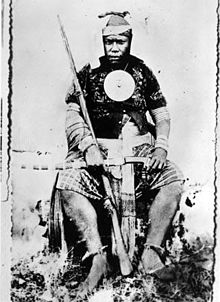 Liurai ( Liuriai ; in Kemak : Koronel bote ; also: Usif , Atupas ) is the traditional title of a ruler in Timor . It means something like "outstanding from the earth". The rulership of a liurai was called rai ( tetum for land , region , earth ). Due to the similar Portuguese word rei for king , the rulers were referred to as Reino (Portuguese for kingdom ). Other European languages ​​took over this meaning, which is why Liurais are now described as little kings . In Dutch one uses raj or raja . However, the empires of the Liurais were not isolated, homogeneous, sociocultural structures, which constitutes an empire in the true sense of the word. Lately, the description as petty kings has been rejected by some authors as "imported from Europe".

The name originally comes from a mythical ruler who is said to have founded the empire of Wehale . At first this title was restricted to its ruler. Only later was it used for the other tribal leaders of Timor. The Liurais secured their power through an intricate network of relationships and weddings. They had a great influence on the population even during the colonial period, but they became more objects of worship and deep respect. In addition, they drew their claim to power in part from sacred objects ( luliks ) that were in the possession of their family.

The Liurai belonged to noble families, called Datos , and were chosen by their peers and their descendants, the Principais . If a Liurai died, his successor was chosen from among the members of the royal male line ( patrilineal : male succession only) - hence the widespread address of the Liurais as amo , which is derived from the tetum word for father, áman . Although the Liurais exercised the highest executive power, they were controlled by a council of elders, in particular the Dato-hei , the shadow chief. He was responsible for observing class manners and customs that conformed to the Malay Adat . If the entire royal family died out, one of the Dato families followed as successor.

There were two other classes of society. The Ema-reino (originally probably Ema-rai ) formed the free, non-noble population. The bottom layer was divided into two groups, the Ata (slaves) and the Lutun (herdsmen and servants). Sometimes the Lutun are also characterized as serfs . The Lutun served the Liurai, tilled their fields and looked after their cattle. In contrast to the Ata, however, they could not simply be sold, since they belonged firmly to the land on which they lived and were therefore more the property of the empire. The last Lutun are said to have existed until 1940. The Ata were mostly people from neighboring empires who were captured during raids. Such were everyday life in old Timor, which is why slaves could always count on being freed again. Therefore, the proportion of the Ata population did not increase over time. Even those who fell into poverty and could not support themselves, such as orphans and widows, could become a Lutun or Ata. Likewise, after a crime or through birth, one could become a member of the lowest class, whereby descendants in the second or third generation were usually released into freedom. Despite their low status, Ata and Lutun were part of human society and were generally treated well. They had a certain degree of freedom of movement and could, for example, also trade and farm on the side. If they could take care of themselves, they had the option of asking their masters to be released. It was even possible to marry into the Liurai family - one reason why the Timorese ethnic groups, despite their very different origins, have mixed up with each other and are culturally very close. In sparsely populated Timor, the fame and fortune of a liurai was not based on the area of ​​land that he ruled, but on the number of his subordinates.

The kingdom of Liurais was divided into Sucos , each consisting of three to 20 settlements and from Dato (in Dutch sources: temukung ) were ruled. These settlements, however, did not form closed villages, but were hamlets spread out far apart. The reason for this is the rugged geography of the island.

The individual realms were structured in a ritual hierarchy. In the first place stood the "Maromak Oan" (the child of God), who (only symbolically) represented the feminine and inactive and resided in Wehale. The local Liurai embodied the masculine and active side. Subordinate to him were the Liurai of Sonba'i (West Timor) and Likusaen (today: Liquiçá , East Timor). The Liurai of Wehale, Sonba'i and Likusaen were considered the "sons" of the Maromak Oan. Other stories call Luca the third empire instead of Likusaen. The others were nominally subordinate to the three realms. This did not result in any real power, but the prestige of the three rulers could aid in the formation of alliances.

In the ritual status of the Liurai in the hierarchy of Wehale was the "Maromak Oan" (the child of God). While the Liurai embodied the masculine and active side, the Maromak Oan (only symbolically) represented the feminine and inactive. According to legend, the Maromak Oan had three sons: Liurai (roughly "outstanding from the earth"), Sonba'i and the Ancestors of the ruler of Likusaen (today: Liquiçá) were. Sonba'i ruled west Timor, which the Portuguese called Servião , the Dutch Zerviaen or Sorbian. Liurai founded Wehale in the center of the island and the east was ruled by Likusaen.

There are various theories as to the origin of the name Liurai . One assumes that it is derived from the Javanese word lurah (district chief) or the aristocratic title larah from Sumatra . More likely it comes from Tetum, the lingua franca of Central and East Timor. Rai means land , Liu means more , but could also be derived from the tetum word Leo for place . Dato can also be assigned to the Tetum, but comes from Malay , where it means head of an archipelago . Also Suco is Malay origin with the meaning district, tribalism or communities . This leads to the conclusion that the social system originated in the west of the Malay Archipelago and was introduced here by immigrants. In fact, according to oral accounts, it was not until the 14th century that the Tetum immigrated from Malacca to Timor.

Even during the colonial days of the Portuguese and Dutch , Liurais ruled the island in a large number of small empires. The colonial administration was only weakly exercised over these regional rulers, in that they were induced to form tributary alliances with the colonial power.

From 1702 the Portuguese governors awarded the Liurais the military rank of coronel (colonel) - a tradition that was continued until the end of the Portuguese colonial period in Timor in 1975. Loyal Liurais were awarded high titles and medals, and the noble honorary title Dom was used as a salutation . From the middle of the 19th century, Portugal tried to strengthen control over the petty kings, but it was only after the rebellions between 1861 and 1912 that the power of the Liurais was broken. The individual sucos, the administrative units within the empires, were withdrawn from the rule of the Liurais and the Liurais were subordinated to the military commanders. The children of the Liurais were brought up in a European way in Catholic schools. The sucos, both the independents and those still connected in the rich, survived as the basic political cell to this day. Liurai was now called the head of the Suco, who held the greatest power in his area.

When decolonization began in 1974/75, the Klibur Oan Timor Asuwain (KOTA) was founded as a monarchist party of the Liurais. The colonial power Portugal did not recognize it as a party because it had too few supporters. The KOTA advocated an indirect electoral system in which each tribe could designate a chief from the men of one lineage. These chiefs should then elect the representatives for parliament from among their ranks, and these in turn elect the king. Most foreign observers are of the opinion that KOTA would never have had the chance to win approval from the population, only the journalist Bill Nichol believes that they could have won the majority with these ideas if they did not consider themselves presented so incompetently and got advertising time on the radio. On January 26, 1975, the KOTA launched an election campaign in Dili with 10,000 participants. In 1999, when the end of the Indonesian occupation was on the horizon, ideas from self-government to self-determination in business and defense or the establishment of a senate for the Liurais were discussed .

Today the Liurai has practically no political or administrative power, but is still treated with respect and deference by the Timorese people. Several East Timorese politicians come from Liurai families. The Partido do Povo de Timor and the KOTA are particularly supported by them.

It was not until 1916 that the last Liurais in West Timor were brought to reason by the Dutch. Sonba'i was even able to maintain its independence until 1906. In the colonial administration, the small kings named Rajas even retained a certain influence. Some empires became zelfbesturend landschap (self-governing territory).

Even after Indonesia's independence, the rulers retained a leadership position in their self-governing territories (Swapraja) . But by 1962 this form of monarchy was also replaced by a republican form of administration by the central government.

Timor and neighboring islands in the 17th and 18th centuries

The French explorer Louis de Freycinet , who visited Timor in 1800, compiled a list of the kingdoms on the island for the past 200 years. Accordingly, 23 were under Portuguese sovereignty, 24 were Portugal tribute and 18 were allied with it. Only five empires are listed in the Dutch dominion. Another picture is provided by a Portuguese list from 1811. It lists a total of 62 rulers on Timor (16 in the west and 46 in the east) that were ruled by a Dato or Liurai.

According to a survey in 1910, the number of empires loyal to Portugal was now 73 or 75. Some sources also speak of around a hundred small empires.

Ultimately, the number cannot be precisely fixed, as it was constantly changing due to wars, mergers and splits and some were subordinate to others.