Friis, who was originally a journalist , was State Secretary (Department Head) in the Ministry of Justice from 1904 to 1911. He was then a member of Overformynderiet , a public institution that existed from 1869 to 1982 and dealt with the Danish legal system , until 1923 . As such, he was also chairman of an Extraordinary Commission on Legal and Administrative Reforms during World War I.

In 1923 he was chairman of the Overformynderiet and 1928 to 1936 of another state organization, the Overfredningsnævnet . 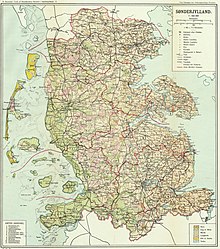 Historical map of North and South Schleswig around 1918

As such, he was particularly responsible for preparing parliamentary elections ( Folketing ). In addition, his government was the implementation of the carried out in February and March 1920 referendums in Schleswig , to territorial concessions to Denmark by Germany led.

After a month in office, he handed over the office of Prime Minister on May 5, 1920 to Niels Neergaard , who formed a government consisting exclusively of ministers from the Liberal Party ( Venstre ).

During his tenure he was also Minister of Defense .

Heads of Government of the Kingdom of Denmark

Defense Minister of the Kingdom of Denmark