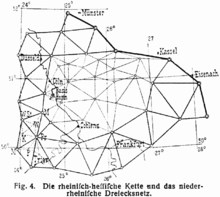 In geodesy , a surveying network (usually just called a network ) is an arrangement of surveying points that are connected to one another "like a network" through observations (measurements). Networks can for example

A geodetic network is used to determine the coordinates of survey points in a chosen reference system . For the determination, observations are made between the individual points of the network. These observations can be:

If you measure all three angles α, β, γ in a triangle, there is an overdetermination. This can be expressed in the following condition:

In order to arrive at a plausible result, improvements are made to the three measured angles so that the result then gives the expected value of 180. For example, if the measured angles add up to 180.1 °, the final error is divided into three equal parts:

The choice of improvements is normally made using the least squares method , according to which the sum of squares of all improvements is as small as possible. There are two calculation models for this:

Again, one obtains an (overdetermined) system of equations, whereby the coordinates of the measurement points are already the unknowns. A clear solution can be found for this (after linearization ) under the minimum condition.

In modern, especially large-scale networks, an extensive optimization of the network structure is desirable. In addition to the greatest possible accuracy , this so-called network design also aims to ensure full controllability ( reliability ) of the measurements and is a demanding task in mathematical geodesy. Methods related to this were developed by geodesists Erik Grafarend and Fernando Sansò , among others , and are partly based on multi-dimensional concepts of geometric stochastics .

In geodetic networks, usually only relative quantities are measured, i.e. quantities that refer to the difference between two or three points (angles, distances, space vectors). This defines the internal geometry of the network. But this does not yet define where the network will be stored in the coordinate system. Example: The distance s  = 35 m between two measurement points is measured . This specifies that the two points must be 35 m apart.
That can mean:

In order to eliminate this date defect, which means a system of equations with a rank defect in a mediating calculation , additional conditions for storage in space or on the earth's surface must be specified:

Significance and history of surveying networks

Extensive surveying networks must have existed in ancient Egypt in order to restore the property boundaries after the annual Nile flood and to build the pyramids. In Greek antiquity, on the other hand, location determination was largely limited to astronomical latitude determination and isolated data from ship navigation .

In the Middle Ages , the measurement and calculation methods were further developed in Arabia , but large-meshed surveying networks only emerged in the course of the nautical portolane (coast and sea ​​maps ). Around 1610 , the Dutch astronomer Willebrord van Roijen Snell (Snellius) developed the mathematical basis for triangulation .

Jean Picard is considered one of the founders of geodesy . He carried out the first triangulations over great distances with telescopes. In the 18th century, the Cassini family triangulated a network encompassing all of France and created the Carte de Cassini on this basis .

In the course of the 18th century, surveying management was transferred to Germany and Austria-Hungary . At the beginning of the 19th century , Gauß , Liesganig and others developed the theory of land surveying and triangulation networks were spanned over large stretches of land. Angle measurements were carried out between prominent points up to 50 km away (on hilltops, mountain peaks, etc.), while the distance measurements had to be limited to a few “baselines”. The nets were initially stored in regional fundamentals, later in cross-state projects ( Potsdam in Germany , the Hermannskogel near Vienna in Austria ). To determine the network scale, distance measurements were carried out approximately every 200–300 km (for example the “Wienerneustädter Basis” near Wiener Neustadt in the level of the southern Vienna Basin or near Josefstadt in Bohemia.)

Based on the triangulation points of the first order network (TP) created in this way, local “network densifications” were carried out later. For this purpose, the “geometer” or “engineer topographer” established a geodetic network in the local area (e.g. a municipality), which was measured and calculated using the first-order TP that had already been calculated. This resulted in further triangulation points of subordinate hierarchy (network of 2nd to 4th or 5th order), which already formed a narrow grid of fixed points every 1 to 3 km. From the 1950s , the increasing demand was taken into account by so-called switch-on points, which were closer than 1 km in the country, in cities even down to 200-300 meters.

At the beginning of the 1970s, the world network of satellite triangulation achieved a previously unattainable resolution (± 4 m at the ground stations). In the 1990s , many of these fixed points were re-measured using a GPS network, which allowed the large-scale network accuracy to be increased to a few centimeters .

Today the measurement of a geodetic network to determine the points in all areas is a standard procedure. It is used in engineering geodesy as well as in cadastral surveying for the division of parcels. This is due on the one hand to the extensive use of electronic measuring devices ( theodolite , electronic distance measurement ) and to the spread of software for calculating a mediating compensation.