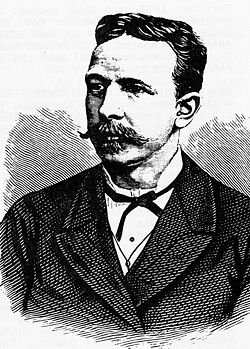 Lenz, the son of a shoemaker, graduated from the Leipzig Nicolaigymnasium. From 1866 he studied mineralogy and geology at the University of Leipzig and was awarded a Dr. phil. PhD . In 1870 he went to Vienna as a teacher at a private institute; In 1872 he joined the Imperial and Royal Geological Institute as a volunteer , where he was permanently employed in the same year in connection with his Austrian citizenship . He mapped southern and eastern areas of Austria-Hungary . 1874-77 he was on leave in Vienna, as an explorer in the service of the Berlin-based German Society for the Exploration of Equatorial Africa in the French colony of Gabon , where he mainly worked in the area of ​​the Ogowe River . However, Lenz had to cancel the expedition due to illness and the refusal of his black companions to go any further. On the way back he met Pierre Savorgnan de Brazza , who was completing the study of the Ogowe Basin.

From 1877 to 1879 he took part in the regional surveys in eastern Galicia ( Stryj , Bolechiw , Halytsch ), which also involved several prehistoric excavations , on behalf of the Reichsanstalt as a section geologist .

His second trip, 1879–80, brought greater success. An expedition led by Lenz crossed the Sahara from Morocco to Senegal for the first time ; The main focus of the trip was geological studies, especially the iron ore deposits suspected in northwest Africa. In Timbuktu , Lenz, who was mistaken for the son of the African explorer Heinrich Barth , was warmly received on July 1, 1880, although the general mood in the caravan city was heated and latently xenophobic because of the French advances from Senegal and Algeria towards Niger . Lenz, who, dressed appropriately, pretended to be a ( Muslim ) Turkish doctor, and his companions had been able to travel largely unmolested, but after his return to Europe, the researcher participated particularly aggressively in the anti-Islamic agitation that led to a colonial occupation of northern and should justify West Africa ideologically. Quote required. Lenz was the first European who came from the north to reach the Sengal via Timbuktu (arrival in the port of Saint-Louis on November 22, 1880). A comparable route had been covered in the opposite direction by René Caillié (1799–1838) half a century earlier.

After lectures at geographical societies in Spain, France and Germany, Lenz was again at the Geological Reichsanstalt from mid-1881 , was now primarily concerned with geographical work and took over the editing of the monthly From all parts of the world  , was subsequently Secretary General of the kk geographical society and, on March 7, 1885, full professor of geography at the Imperial and Royal University of Chernivtsi .

However, he did not get around to taking up this position, as he was commissioned by the kk geographical society to lead an expedition leading to the newly established Congo state . Their goal should be in addition to the attempt from the top of the Congo , while off to the northeast, to reach the upper Nilgebiete findings on between the two waters existing watershed to obtain.

The main aim of this research trip, which lasted until 1887, was to determine the actual trade conditions in the Congo Free State founded in 1885 and to map the Congo River. On July 1, 1885, the expedition left on the steamer Carl Woermann von Brunswik (Kiel) (completed in 1881, scrapped in 1908 ) . The destination was the port city of Banana at the mouth of the Congo . The ship's route considered trading places at which German, British and French factories were located. The arrival in Banana took place on August 14, 1885.

Lenz concentrated primarily on geological and ethnographic studies, while his companions, initially up to his illness with diphtheria , Oskar Baumann (1864–1899), then Friedrich Bohndorff (1848–1894), were responsible for mapping the area. Adverse circumstances, especially the lack of sufficient military power , made the plan to reach the areas north of the Congo fail - however, the company managed to cross the African continent from the mouth of the Congo to the mouth of the Zambezi .

For about 1,600 kilometers of river, from Pool Malebo (near today's Kinshasa ) upstream to Kisangani  ( ), it took the research group 48 days on board the new steamer H. M. Stanley , made available by the government of the Congo State, since December 29, 1885 . In Kisangani Lenz met the slave and ivory trader Tippo Tip (1837 / 38-1905), the most influential figure in East Africa at the time, who advised him against an expedition to the highly unsafe areas north of the Congo, but for him the coming onward journey on the strongly flowing Congo (beyond the Stanley Falls ) gave three heavy canoes (6–8 rowers each) for almost free   and gave him some of his Arab followers to protect him against attacks ( anthropophagic ) natives.

After (again) 48 days, the canoes reached Nynagwe ( ) ( Maniema province ), a trading place whose importance in favor of Kasongo ( ), the headquarters of Tippo Tips , was dwindling. On May 23, 1886, the expedition came to Kasongo, 15 kilometers inland - and later reached the Indian Ocean via land passages from Tanganyika to Lake Nyassa and via Shire and Zambezi on December 13, 1886 . The journey home led via Mozambique (which he reached on January 14, 1887), Zanzibar and Aden .

In March 1887 Lenz was back in Vienna, and in June the following he became a full professor at the German University of Prague , where he succeeded Dionys von Grün (1819-1896) at the chair for geography created in 1875 , established a geographic institute and established a teaching tradition reasoned. Lenz was dean in 1892/93 , rector in 1902/03 ; In 1909 he voluntarily retired .

House where you lived and where you died (Sooss, Hauptstraße 48)

Tomb in the local cemetery of Sooss

Oskar Lenz, who had acquired a property in the municipality of Sooss in 1894 , died of a stroke (one year after the death of his wife, Paula, née Ridolfi, who came from Vienna). He was buried for rest on March 5, 1925 in the local cemetery in Sooss.