Steven Zuber (born August 17, 1991 in Winterthur ) is a Swiss football player . The midfielder is under contract with Bundesliga club Eintracht Frankfurt and is a national team player .

Zuber moved four years later to the Grasshopper Club Zurich , where his professional career began. During the 2008/09 season he made his debut in the Super League and played his first game for the first team on July 12, 2008 in the UI Cup under coach Hanspeter Latour when he was substituted on shortly before the final whistle. After just three minutes, he scored the goal to win 3-0. During this season, Zuber made ten appearances in the Swiss championship.

In the 2009/10 season he made his breakthrough and played 20 league games for Grasshopper Club Zurich, in which he scored five goals. The following season he came on 34 missions and scored four goals. On May 20, 2013, he won his first title with the Grasshopper Club. In the final of the Swiss Cup , the Zurich team prevailed against FC Basel after a penalty shoot-out . This was also the first Grashoppers title since winning the championship in 2003. Zuber played a total of 146 games for the Zurich team and scored 33 goals. 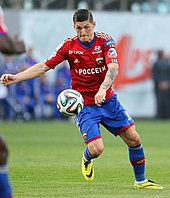 In July 2013 Zuber moved to Russia , where he signed a five-year contract with the former army club PFK CSKA Moscow . His first game was followed by his first title in Russia. In the final of the Russian Supercup , the team from Zuber Zenit defeated Saint Petersburg 3-0. He stood on the field for around 70 minutes. Zuber has played over 30 games for CSKA Moscow this season and provided four assists. On matchday 26, he scored his first goal in the Premjer League in a 4-0 away win against FK Kuban Krasnodar . On May 15, 2014, he won the Russian championship with CSKA Moscow.

His contract in Hoffenheim ran until 2023.

On January 9, 2019, VfB Stuttgart signed Zuber on loan until the end of the season. After the Swiss failed with VfB as tenth in the table in the relegation at 1. FC Union Berlin , he relegated to the second Bundesliga with the team, but returned to his home club Hoffenheim in summer 2019.

For the 2020/21 season, Zuber moved to Eintracht Frankfurt in exchange with Mijat Gaćinović within the Bundesliga . He signed a contract in the Main metropolis until 2023.

He took part in the 2012 Olympic Games in London and played three games there. The Swiss selection was eliminated after a draw and two defeats after the preliminary round.

Zuber made his debut on March 25, 2017 in a 1-0 World Cup qualifying home game against Latvia for the Swiss national team .

At the 2018 World Cup in Russia, he was part of the Swiss squad . He made three appearances and scored a goal in the opening game against Brazil to make it 1-1. With the team he was eliminated in the second round.

Squad of Eintracht Frankfurt in the 2020/21 season