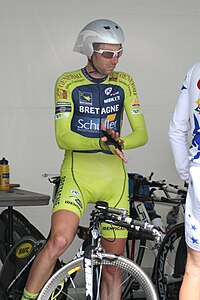 The team Arkéa-Samsic is a French cycling team based in Rennes .

General Manager is Emmanuel Hubert. The team from Brittany was sponsored by the company Jean Floc'h until 2006, whose founder Jean Floc'h, who was enthusiastic about cycling, died in May 2007, Armor Lux was from 2007 to 2008 and Schuller was the new sponsor from 2009 to 2012. In 2013, it was named after Séché Environnement, a waste disposal company.

The team is a member of the Mouvement Pour un Cyclisme Crédible (MPCC for short; German movement for credible cycling).

Success in the UCI WorldTour

Success in the UCI ProSeries

Success in the UCI Continental Circuits

Seasons of the Arkéa-Samsic team