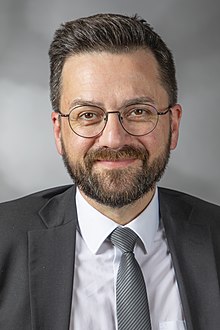 Kutschaty comes from a family of railway workers in the north of Essen and was the first of the family to graduate from high school. After graduation in 1987 and his civilian studied Kutschaty at the Ruhr-University Bochum law . In 1995 he passed the first state examination, two years later the second state examination. From 1997 to 2010 he worked as a lawyer .

Kutschaty is married and has three children.

Since June 8, 2005 he has been a member of the state parliament of North Rhine-Westphalia, where he is a full member of the interior committee, the legal committee and the control committee according to § 23 d. Belonged to the Constitutional Protection Act of North Rhine-Westphalia. He was also the deputy chairman of the Parliamentary Committee of Inquiry I “ JVA Siegburg ”. In the red-green minority government led by Hannelore Kraft (see " Cabinet Kraft I ") Kutschaty held the office of Minister of Justice. In the same function he belonged to the Kraft II cabinet .

On June 19, 2019, Kutschaty got involved in interviews as a candidate for the SPD federal chairmanship.

In 2011, the Essen social judge Jan-Robert von Renesse charged that Kutschaty, as the highest employer, had covered his dismissal as the state social judge responsible for the ghetto pension law. Until he was released from the relevant tasks, the judge had practiced a more generous implementation of the law passed by the Bundestag in 2002, just as the Federal Social Court had previously requested. The delivery took place on the grounds that the judge tried to conduct the proceedings while he was sick. In 2012, the service court for judges at the Düsseldorf Regional Court found that the delivery was lawful.

In June 2014, Kutschaty filed a lawsuit against von Renesse for damaging the social justice system's reputation. Specifically, it was about statements in the petition to the Bundestag from 2012. He is said to have written there, among other things, that "agreements and actions are taken in the NRW judiciary in order to deliberately harm Holocaust survivors".

In March 2016, NRW Prime Minister Hannelore Kraft (SPD) was sent a petition by Colette Avital ( Awoda ), Chairwoman of the Center of Organizations of Holocaust Survivors (COHS) and former Knesset MP and former presidential candidate , according to which Holocaust survivors and their descendants should each other "Deeply offended" felt "by the news that the judge Jan-Robert von Renesse is brought to court". The petition goes on to say: “This is the first time a judge has been brought to justice after World War II for helping victims to gain their rights. Richter von Renesse is a decent and courageous man. We owe him deep gratitude and believe that his efforts should be appreciated and not punished ”. In a protest note to Federal Justice Minister Heiko Maas (SPD), the Simon Wiesenthal Center reprimanded a "harassment" against von Renesse.

Shortly before the start of the process in 2016, the lawsuit was withdrawn and the dispute settled out of court.

Because Kutschaty, in his function as chairman of the SPD-Essen, had given the Essen Bundestag member Petra Hinz , who had given false information in her resume, an ultimatum to give up her mandate, Thomas Darnstädt threw him on Spiegel Online a disregard for the freedom of the mandate at the Limit to compelling MPs ( Section 106 (1) No. 2 lit. a StGB ). According to the former SPD member of parliament Willi Nowack , Kutschaty is said to have known about the false information in Hinz's résumé, which he denies. Hinz, who was treated as an inpatient, accused Kutschaty of breaking agreements with her and "finally clearing her for shooting".

Justice Minister of the State of North Rhine-Westphalia