You have to go over seven bridges 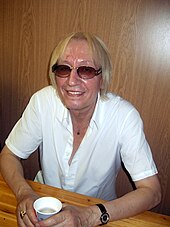 You must go over seven bridges is a song published in 1978 by the GDR rock band Karat . The composition is by Ed Swillms , the text by Helmut Richter . It is one of the most famous German songs of the recent past.

The song goes back to a love story of the same name written by Helmut Richter in 1975, which is about the unhappy relationship between a Pole and a German. Towards the end of the story, the protagonist Gitta keeps reflecting on the lines of verse “You must go over seven bridges”, which expresses her grief, but also her hope and confidence. In 1976 this story was bought up by GDR television . For the film production, Richter again wrote the scenario, directed by Hans Werner. It was Werner who suggested composer Ulrich Ed Swillms for the film music, at that time keyboardist and main composer of the Karat group, who could look back on several successful titles in their career so far. During the production of the film, the idea arose to write a theme song whose core line “You must go over seven bridges” was taken from the original story. Swillms once commented on the genesis of the song: “I stared at this text for two weeks before it suddenly let itself be set to music. But then! The piece had to be recorded between eight and ten in the morning in a measly outside broadcast vehicle that was called the grandiose 'Europa-Studio Grünau'. Can you imagine what the result is - at eight in the morning? ".

On April 30, 1978, the film shot in Pößneck , which eventually bore the same name as the song, was first broadcast. On the day of the broadcast, numerous interested parties from both parts of Germany called the Adlershof television studio to find out where the title could be obtained. When Karat performed with the title at the 1978 International Schlager Festival in Dresden and won the Grand Prix, the title quickly gained even greater popularity. A single was pressed and the song landed in the GDR annual hit parade at number 2, behind the title King of the World , which also comes from Karat. In 1979, Karat released the album Over Seven Bridges in the GDR, which appeared in the Federal Republic of Germany on the Pool label in the same year under the name Albatros . About 800,000 copies of the album were sold in the following years.

In 1980 Peter Maffay visited the group Karat at a concert in Wiesbaden, the capital of Hesse . He had heard you must go over seven bridges on the radio and asked the band for permission to play the title. Karat agreed and Maffay produced a rearranged version of the song, including a saxophone solo. The song quickly became even more popular in Maffay's version. The album Revanche , which contains the title, sold over two million copies. Since the GDR Ministry of Culture forbade Karat as a GDR band in the early 1980s to appear on West German television, the title was increasingly present in the media as interpreted by Peter Maffay. This also meant that many listeners to this day believe that the title originally came from Maffay.

Over seven bridges has also been performed jointly by both interpreters since 1990 . So there is a duet that appeared on the Karat album in 1990 ... in the next peace . The performers also presented the title live together several times, for example on the Day of German Unity in Berlin in 2000 , for Karat 's 25th anniversary concert in 2000 in Berlin's Wuhlheide and in 2008 for the “ Golden Hen ”.

Federal President Joachim Gauck chose the song as one of three for his farewell service on March 17, 2017 ( Großer Zapfenstreich ).