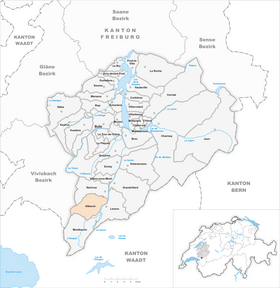 Albeuve ( Friborg patois Èrbivouè ? / I ) is a village and formerly independent municipality in the district Greyerz the canton of Friborg in Switzerland . On January 1, 2002, Albeuve merged with Neirivue , Lessoc and Montbovon to form the new municipality of Haut-Intyamon , whose municipal administration is located in Albeuve. The former German name Weissbach is no longer used today.

Albeuve is 769  m above sea level. M. , 11 km south of the district capital Bulle (linear distance). The clustered village extends on the western edge of the Saan Valley south of the Marive stream , in the Haute-Gruyère, at the eastern foot of the Moléson chain. The former municipality area was around 12.5 km². The area extended from the Saane (French: Sarine) westward over the valley floor of Albeuve and down to the mountain range of Vanil Blanc ( 1828  m above sea level ) and Dent de Lys ( 2014  m above sea level ). The northern border was formed by the Marive , in the south the area extended to the Hongrin .

With 577 inhabitants (2000), Albeuve was one of the smaller communities in the canton of Friborg before the merger, but is the largest town in Haut-Intyamon in terms of population. Albeuve includes the Les Sciernes d'Albeuve settlement ( 900  m above sea level ) on a terrace at the foot of the Dent de Lys.

For a long time, Albeuve was predominantly an agricultural village. The animal husbandry and the dairy industry (for cheese production) have today an important place in the economic structure of the population. There are also other jobs in local small businesses and in the service sector. In the course of the 20th century, chalet-building, construction and furniture-making businesses have settled in the village. In the last few decades the village has also developed into a residential community. Some workers are therefore commuters who work mainly in the Bulle region.

The village has good transport connections. It is on the main road from Bulle to Château-d'Oex . On July 23, 1903, the railway line from Bulle to Montbovon with a station in Albeuve was put into operation. To the west of the Dent de Lys located Châtel-Saint-Denis is a walking on the Col de Lys .

Unlike the other areas of Haute-Gruyère, Albeuve did not belong to the county of Gruyères , but was subordinate to the cathedral chapter of Lausanne since 1019 and directly to the bishop of Lausanne since 1291. In 1536 the village was conquered by Freiburg troops. Albeuve had been under Freiburg rule since 1537 and was incorporated into the Bailiwick of Bulle as an exclave. After the collapse of the Ancien Régime (1798), Albeuve initially belonged to the prefecture and from 1848 to the Gruyères district. Numerous houses were destroyed in a great fire in 1876.

On June 26, 2001, the voters of Albeuve voted with a yes majority of around 90% for the merger of the municipalities of Albeuve, Neirivue , Lessoc and Montbovon . With effect from January 1, 2002, the new community Haut-Intyamon was created.

The parish church of Albeuve probably dates back to the 9th or 10th century, making it the oldest church in Haute-Gruyère. It was destroyed in a village fire in 1876. The new building in neo-Gothic style took place from 1876 to 1879. In Les Sciernes d'Albeuve there is a chapel, which was mentioned in 1635. The current building dates from 1817 to 1820.