Cerniat (FR) ( Freiburger Patois Thèrnya ? / I ) was a municipality in the Gruyère district of the canton of Friborg in Switzerland until December 31, 2013 . The German name Scherni is no longer used today. On January 1, 2014, Cerniat merged with the former municipality of Charmey to form the new municipality of Val-de-Charmey .

The canton abbreviation FR is used by the Swiss federal authorities to distinguish Cerniat from the homophonic Vaudois village and former municipality of Cerniaz .

Cerniat is 927  m above sea level. M. , 8 km east of the district capital Bulle (linear distance). The farming village extends on a southern slope at the foot of the Vanil des Cours, above the Javro (right tributary of the Jaunbach ), in the open valley of Charmey, in the Freiburg Alps.

The area of ​​the 33.8 km² municipal area covers a section of the pre-Alpine area in the southern part of the canton of Friborg. The extensive area is bounded in the south by the Javro . To the north, the municipality extends up the relatively gently rising slope of the Berra , which is covered by pastures and forests , which is 1719  m above sea level. M. forms the highest point of Cerniat. This slope is subdivided by a series of small brooks that flow into the Javro. To the west, the Charmey valley is bounded by the mountain peaks of Mont Bifé ( 1,483  m above sea level ) and Vanil des Cours ( 1,562  m above sea level ).

In the northeast, the area of ​​the municipality extends over the ridge of the Berra into the headwaters of the Ärgera with the Plasselbschlund and the ridges of Kapberg ( 1442  m above sea level ) and La Patta ( 1616  m above sea level ). The northeast border runs along the Höllbach (right tributary of the Ärgera). A small part of the municipality in the area of ​​Hof Bürglenberg lies in the catchment area of ​​the Schwarzsee . In 1997, 2% of the municipal area was in settlements, 54% in forests and woodlands, 41% in agriculture and a little less than 3% was unproductive land.

The settlement of Les Utsets ( 940  m above sea level ) on the slope of the Vanil des Cours above the Javro, the monastery of La Valsainte and numerous individual farms scattered across the southern slope of the Berra belong to Cerniat . Up until December 31, 2013 , neighboring communities of Cerniat were Charmey , Crésuz , Châtel-sur-Montsalvens , Botterens , Corbières , Hauteville , La Roche , Plasselb and Plaffeien .

Until the second half of the 20th century, Cerniat was a predominantly agricultural village. Even today, livestock and dairy farming play an important role in the income structure of the population. Gruyère cheese is made in the alpine dairies . Further jobs are available in local small businesses and in the service sector. In the last few decades the village has also developed into a residential community. Many workers are therefore commuters who work in the Bulle region. 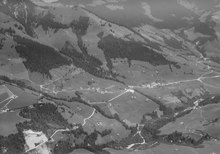 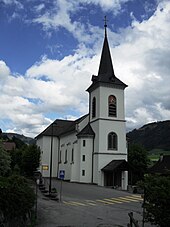 The first written mention of the place took place in 1288 under the name Sernia . Cerniat is derived from the Latin word circinatus (fenced), which means the fenced-in land of a courtyard. Since the Middle Ages, the place has belonged to the Lords of Corbières, under whom the Carthusian monastery of La Valsainte, northeast of Cerniat, was founded in 1295 .

As part of the dominion of Corbières, Cerniat came under the suzerainty of Freiburg in 1553. At the beginning of the 18th century and in 1799, numerous houses fell victim to a conflagration. After the collapse of the Ancien Régime (1798), the village belonged to the sub-prefecture of Corbières during the Helvetic period , which was raised to the status of a district in 1803. In 1848 Cerniat was incorporated into the Gruyère district with Corbières. On March 3, 2013, the citizens approved the merger project with the municipality of Charmey .

Cerniat, which formerly belonged to the Broc parish, has been its own parish since 1618. The parish church of Saint-Jean-et-Paul stands a little outside the village on a ledge below the hamlet of Les Utsets.