Grandvillard ( Freiburger Patois Le Granvelâ ? / I ) is a municipality in the Gruyère district of the canton of Friborg in Switzerland . The former German names Langwiler and Grosswiler are no longer used today.

Grandvillard lies at 762  m above sea level. M. , 8 km south-southeast of the district capital Bulle (linear distance). The clustered village extends on the alluvial cone of the Tâna (or Taouna ) on the eastern edge of the wide valley of the Saane (French: Sarine) in the Haute-Gruyère, in the Freiburg Alps east of the Moléson .

Grandvillard was a predominantly agricultural village until the second half of the 20th century . There were also mills, sawmills and tanneries since the late Middle Ages. Even today, livestock and dairy farming (for the production of Gruyère cheese ) and, to a lesser extent, arable farming play an important role in the income structure of the population. Further jobs are available in local small businesses (including wood processing in particular) and in the service sector. Gravel pits are exploited in the Saane valley. Grandvillard is the location of a military shelter. In the last few decades the village has also developed into a residential community. Many workers are therefore commuters who work in the Bulle region.

The community is very well developed in terms of traffic, although it is located away from the major thoroughfares. Grandvillard can be reached from the main road from Bulle to Château-d'Oex via a short spur road. The village is connected to the public transport network by a bus from the Transports publics Fribourgeois , which runs from Bulle to Grandvillard. The Grandvillard stop (1.5 km from the town center) on the railway line from Bulle to Montbovon, which went into operation on July 23, 1903, is located on the western side of the Saane near Villars-sous-Mont. 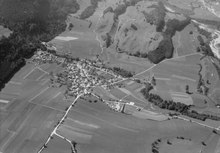 The municipality of Grandvillard was settled very early, which is evidenced by tumuli from the Hallstatt period and traces from the Roman period and the early Middle Ages . The first written mention of the place took place in 1228 under the name Vilar . Later the names Vilar retro Grueriam (1390), Villar (1399) and Communitas Magni Villarii retro Grueriam (1497) appeared. The place name is made up of the late Latin word villare (village, hamlet) and the French word grand (large).

Since the Middle Ages , Grandvillard belonged to the lordship of Montsalvens, which formed a castleague of the county of Gruyères . From the 12th to the 14th centuries there is also evidence of a noble family from Vilar. In 1462 the residents of Jean de Montsalvens were given the right to choose their mayor themselves.

After the last Count of Greyerz went bankrupt, Grandvillard was incorporated into the Friborg bailiwick of Greyerz. After the collapse of the Ancien Régime (1798), the village first belonged to the prefecture and from 1848 to the Gruyères district.

As part of the community mergers promoted by the canton of Friborg since 2000, Grandvillard was to merge with Enney , Estavannens and Villars-sous-Mont to form the new community of Bas-Intyamon . Since the village population spoke out against a merger, Grandvillard remained a politically independent municipality.

Since 2012, the community has been part of the Parc naturel régional Gruyère Pays-d'Enhaut .

The parish church of Saint-Jacques was built in 1935–37 on the site of a previous building from the 16th century; she has a valuable statue of the Virgin Mary with child from the 14th century. Grandvillard has preserved its picturesque townscape with numerous farmhouses (mostly from the 17th century) in the Gruyère style. The Maison du Banneret (House of the Venners) dates from 1666 and the Maison Lucien Raboud from 1641. On a hill near the Saane is the La Daoulaz chapel, which was built in 1701 on the site of a Romanesque chapel.