Corbières ( Freiburger Patois Korbêre ? / I ) is a municipality in the Gruyère district of the canton of Friborg in Switzerland . The former German name Korbers is no longer used today.

On January 1, 2011, Villarvolard merged with the municipality of Corbières.

Corbières is 714  m above sea level. M. , 5 km northeast of the district capital Bulle (linear distance). The former farming village extends on a terrace over the eastern shore of Lake Gruyère , at the foot of the Berra .

The area of ​​the 4.2 km² municipal area covers a section of the pre-Alpine area in the Gruyère region. The westernmost part of the municipality is occupied by Lake Gruyère, which has a narrow point at Corbières. A small area west of the reservoir in the area of ​​the Joux d'Everdes forest also belongs to Corbières. To the east, the parish extends over the terrace on which the village is located, and in a narrow strip up the slope to the ridge southwest of the Berra. Here is on the forest height Au Solitou with 1381  m above sea level. M. reached the highest point of Corbières. To the east of the ridge, the area extends into the catchment area of ​​the Javro . In 1997, 7% of the municipal area was accounted for by settlements, 38% for forests and trees and 55% for agriculture.

Until the second half of the 20th century, Corbières was a predominantly agricultural village. Even today, livestock and dairy farming and, to a lesser extent, arable farming play a certain role in the income structure of the population. Further jobs are available in local small businesses and in the service sector. From 1932 to 1976 there was a brick factory in Corbières . In the last few decades the village has developed into a residential community. Many people in employment are therefore commuters who work in the Bulle or Freiburg regions.

The community is very well developed in terms of traffic. It is located on the main road from Freiburg to Broc . The direct connection with a concrete bridge (since 1931) over Lake Gruyère branches off at Corbières. The village is connected to the public transport network by the Transports publics Fribourgeois bus routes , which run from Friborg via La Roche to Bulle and from Bulle via Broc to Corbières. 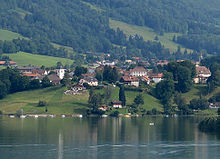 The reign of Corbières until 1225

The first written mention of the place took place in 1115 under the name Corbere ; The Latinized names Corbaria and Corberia are also attested. The rule of Corbières has been documented since the 11th century. Presumably the lords of Corbières descended from the same noble family as the counts of Gruyères and the lords of Grandson. The rule included the right bank of the Saane between Broc and La Roche and the entire Jauntal. A small area on the west side of the Saane also belonged to Corbières. The donations to the Lac de Joux , Montheron and Hauterive abbeys also bear witness to the vast land holdings of the Lords of Corbières.

The town of Corbières was founded around 1200. Its fate was closely linked to the history of the Corbière rule. Around 1225, the territories west of the Saane were combined in the new rule of Vuippens . In 1250 the Lords of Corbières and the Counts of Gruyères came under the suzerainty of the Savoy . At this time, Charmey and Jaun achieved a certain independence under the sidelines of the Lords of Corbières. In the course of the 14th century the lords of Corbières fell rapidly: the main line died out in 1363, while the sideline of Charmey died out in 1361; only Jaun remained in possession of a second branch line until the 16th century.

In 1375, Corbières fell to the House of Savoy along with the entire rule. At that time, the market town lost its extended rights, but was at least exempt from the interest taxes that had been paid to Savoy in 1390. Under Savoy suzerainty, the rule of Corbières was given the rank of castlane. The area was purchased by the county of Gruyères in 1454 , and in 1475 a castle rights treaty was concluded with Freiburg. Due to his financial difficulties, Count Michael von Gruyeres had to sell the dominion of Corbières to Freiburg in 1553. This set up the Bailiwick of Corbières, which lasted until 1798. After the collapse of the Ancien Régime (1798), Corbières was the capital of the sub-prefecture of the same name during the Helvetic Republic, which was elevated to the status of a district in 1803. In 1848 the entire district of Corbières was incorporated into the Gruyère district and Corbières lost its status as the district capital.

Of the two former castles that were in the municipality of Corbières, one is still preserved today. This castle was rebuilt in 1560 on the site of the previous building from 1250 and was the residence of the Bailiff of Corbières appointed by Freiburg. It was redesigned in 1750 and has a relatively low curtain wall and a large Berner roof. The church was built in the 17th century and renovated in 1951. Corbières separated from the parish of Hauteville in 1631.