This article deals with the first and last names. For the other meanings, see Andreas (disambiguation) .

Andreas is a male given name , which also occurs as a family name .

The name is derived from ancient Greek andreios = manly, brave. "Andreas" would then be "the manly, the brave".

The name Andreas comes from Greece and is found there for the first time in the Hellenistic period around 250 BC. Chr. Mention. Other variants of the name are documented earlier, for example in the Olympic list around 688 BC. The name Androlos on. With the Romans, the name came to Central Europe.

The spread of the name goes back to the apostle Andreas (brother of Peter ). He first came to Western Europe through Latin Christianity. But the name spread quickly in other areas such as Palestine . The name "Andreas" or "Andreus" came to England through the invasion of the Normans in 1066. The name has been documented there since 1086. The Romance Andreus changed over time to Andreu and finally to English Andrew . Since the Middle Ages, the name has appeared frequently across Europe, especially in England (13th century), Scotland, and Scandinavia. There was another "boom" after the Reformation .

Although -as is a very common name ending in Greece, the surname is rarely found without additional endings, despite the popularity of the first name.

The most common Swedish surname is Andersson ("son of Anders = Andreas"), which is because Anders was the most common first name in Sweden around 1900. At that time the patronyms became surnames.

The name Andreas was a moderately popular first name for boys in Germany at the end of the 19th century. Its popularity initially declined and then rose sharply in the mid-1940s. From the mid-1950s to the early 1980s, the name was among the ten most popular boys' first names of the year. Although the name never made it to number one in the frequency statistics for a year, it is one of the four most common first names since 1890 (after Peter , Michael and Thomas ). From the 1990s on, its popularity declined sharply.

The name day of Andrew is November 30th (St. Andrea's Day), the feast day of the Apostle Andrew .

Other days of remembrance of the Roman Catholic Church are: 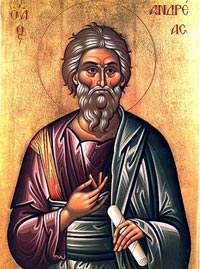