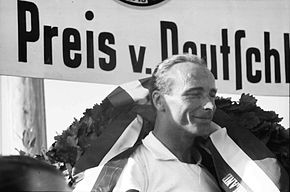 Edgar Barth , here on the podium after a race victory at the Nürburgring in 1957, won the race on Rossfeld

The Rossfeld hill climb , also known as the Rossfeld Mountain Grand Prix , was a hill climb that took place on June 9, 1963. At the same time, the race was the ninth round of the sports car world championship this year.

The race on the Roßfeldhöhenringstraße to Ross Field was the second 1963 Counting for the World Sportscar Championship Hillclimb . Since part of the road is on Austrian territory, this race - a specialty in international motorsport - was held in two countries, West Germany and Austria.

The section closed off for the race was six kilometers long and had to be driven twice by the participants. The winner was whoever achieved the fastest time in the total of the runs. In 1963 it was Edgar Barth who won the race with a lead of five seconds over his brand colleague Joseph Greger ; both drove Porsche 356 models. The race was particularly exhausting for Greger, as he was at the start with two vehicles and achieved two class wins. He came second overall in a Porsche 356 B Carrera; with a Porsche 718 RS he finished the event in seventh place in the final ranking. Also Eberhard Mahle , Hans Herrmann and Mauro Bianchi were with two cars at the start.

After the first run, which was held on a dry road, Hans Herrmann was in the lead in the Abarth 2000 Sport . On the wet track of the second run he fell back to 31st place with this car, but achieved fourth place overall with an Abarth-Simca 1300 Bialbero .

Here you will find teams, drivers and vehicles that were originally registered for the race but did not take part for a variety of reasons.