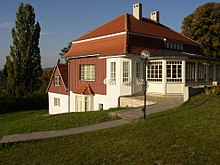 Großjena is an incorporated district of Naumburg (Saale) (approx. 3 kilometers to the north) as is the neighboring Roßbach in the Burgenland district of the state of Saxony-Anhalt .

The place was first mentioned in 1002 as Gene , later also Wendischenjena . A 2006 set up by the local home club at the park gate sandstone obelisk is to point out the significant historic position of the place, with the logo of the archaeological " Himmelswege as milepost" the distances to the Nebra Sky Disk and the solar observatory of Goseck indicates.

Großjena is one of the main places in a settlement chamber that has been inhabited for thousands of years with the "Via Regia" paths crossing each other in the floodplain, coming from the now unknown ford before the former confluence of the Saale and Unstrut on the Lauscheberg, known as the "Heerstraße" to Merseburg and Leipzig continues, and the connecting road from Freyburg / Unstrut to Naumburg / Saale via the Hennenwald is the focus of further research. The discovery of 98 row graves with, among other things, additions of 13 horse skeletons from the 3rd to 8th centuries on the Lauscheberg is currently supposed to provide impetus for this.

Around the year 1000 was in Großjena a castle of Ekkehardiner which with relocation of the headquarters of Naumburg lost to 1010 in importance. After the death of the brothers Hermann and Ekkehard II , their hereditary property in Großjena fell to the Wettin family . In 1271 the Wettin margrave Dietrich the Oppressed assigned it to the St. Georgenkloster Naumburg , which also obtained the courts from the Bishop of Naumburg and other goods in the village until 1593. In addition, there was a margravial fiefdom in the place, after which the noble family "von Jena" named themselves. After the dissolution of the St. Georgenkloster, the monastery Vorwerk was converted into a manor in 1548 , which Elector Moritz von Sachsen lent to Hans von Wilbrecht and which later had changing owners.

Großjena belonged to the Wettin , later Electoral Saxon office of Freyburg until 1815 . However, the jurisdiction over the place lay in the Bishopric of Naumburg associated office Naumburg . Through the resolutions of the Congress of Vienna in 1815, the place was ceded to the Kingdom of Prussia and assigned to the newly formed district of Naumburg in the administrative district of Merseburg in the province of Saxony in 1818.

The most important attraction of this place is the vineyard of Max Klinger . On the vineyard there is a Klinger memorial with the tomb and a sculpture ("athlete") Klinger. His restored country house is open from April to October as a branch of the Museum Naumburg. From up here, on the left bank of the Unstrut , just before its confluence with the Saale in the Großjenaer “Bluebellgrund”, one has a beautiful view to the west of the Unstrutal and the cathedral city of Naumburg (Saale) to the south.

The court jeweler Johann Christian Steinauer from Naumburg had an unusual idea: In 1722, the ten-year anniversary of the regent of Duke Christian von Sachsen-Weißenfels, he had a monument unique in Germany erected in his vineyard near the town of Großjena: the stone festival book, a 200 m Long relief of 12 pictures, shows scenes from the Old Testament, which show the work in the vineyard, the wine consumption and its consequences and of course pay homage to the duke. The problems of preservation are as extraordinary as the occasion for its creation. The reliefs are carved from a rock step in the middle of the red sandstone.

The balustrade adorned with figures along the upper edge of the terrace was reconstructed using old photographs and some existing remains.

A ferry enables hikers to cross the river to and from the flower base . Excursion steamers, which carried tourists between Großjena and Freyburg an der Unstrut , the next town in the north, also left from the ferry berth in the summer months . Above the flower base on the slope of the vineyard are the houses of the Akademie Haus Sonneck , a folk high school.

In the middle of the village is the former manor of the Großjena manor with a classicist manor house from 1818, pleasure garden with historical roses, the former park and the administrator's house with orangery. Until the establishment of the manor in 1548 one of the Vorwerk was at this point George Monastery Naumburg , probably emerged from the former castle of Ekkehardiner . The manor was converted into a fortified moated castle, the foundations of which were reused for the neo-classical building of the manor house after the destruction of the Napoleonic troops when they withdrew after the Battle of Leipzig in October 1813. Important owners of the manor were the Saxon forest master Hans von Wiltperg († 1576, epitaph in the church of St. Marien in Freyburg), the mayor and syndic of the city of Naumburg, Sixtus Braun († 1614), the Saxon-Weissenfels court jeweler and court factor Johann Gottfried Hoffmann from Halle (owner from 1670 to 1720), the Royal Saxon Secret Cabinet and War Minister Georg Wilhelm von Hopfgarten († April 1813), the Prussian Chamber Councilor Christoph Wilhelm Loss (from 1816 to 1830), the district administrator of the Naumburg district, Hermann Jacobi von Wangelin (1812 to 1903). The last owners, the Ernst Laux family, had to leave Großjena in 1945 because of the land reform. After that, the community used the manor house as a school until it was abandoned in 1983 because it was in disrepair. The yard was divided up for new farmers. With the baroque courtyard gate and the restored gardens, it is now possible to imagine the original ensemble again. In the manor house, in addition to many original building details, the halls and the staircase are also worth seeing.

Today the park is a natural monument with carpets of spring bloomers such as snowdrops, march cups, wood anemones, wild daffodils. Among others, the red kite nests in the ancient park trees.

The ecumenical pilgrimage from Görlitz to Vacha leads through the village.

City and districts of Naumburg (Saale)