Hanno Balitsch (born January 2, 1981 in Alsbach-Hähnlein ) is a former German soccer player . He works as a TV expert and soccer coach.

Balitsch started playing football for FC Alsbach at the age of five . During his childhood and youth he was also a talented athlete and was among other things Hessian champion in the high jump .

Balitsch made his debut in the 1999/2000 season as A-youth of SV Waldhof Mannheim in the 2nd Bundesliga . On April 22, 2000, the 28th matchday, he gave his premiere in professional football in a 4-2 win against VfL Bochum . Balitsch was in the Mannheim starting line-up and was replaced in the 62nd minute. Three games later he scored his first competitive goal for the professional team: Balitsch scored 3-1 in a 3-2 draw against Energie Cottbus . From his first appearance on matchday 28 to the last of the 1999/00 season, coach Uwe Rapolder let him appear in all games; On the 34th matchday Balitsch played for the full 90 minutes. In the following year he came on more missions, but was more interchangeable. The midfielder was substituted on or off 14 times in 25 games. In the end, the 4th place was achieved. Thus, the team failed by one point on the promotion spot, which FC St. Pauli secured.

After two years in Mannheim, the midfielder was signed by Bundesliga club 1. FC Köln . Here Balitsch came to his first game in Germany's top division. On the first day of the match, Ewald Lienen replaced him in the 71st minute for Marco Reich in the game against VfB Stuttgart . At the end of its first year in the Bundesliga with FC, the team was in 17th place and relegated.

After the relegation of Cologne after the 2001/02 season , Balitsch moved to neighboring Bayer 04 Leverkusen . The Leverkusen transferred two million euros to Cologne for the transfer. For Leverkusen he played 56 Bundesliga games in the first two years and became a regular straight away. Despite great competition in midfield with Marko Babić , Yıldıray Baştürk , Daniel Bierofka , Carsten Ramelow , Bernd Schneider and Jan Šimák , Balitsch made 30 appearances in the first year. Only three players from the entire team had more stakes. In the game against Hamburger SV on November 30, 2002, Balitsch scored his first Bundesliga goal to mean 1: 1. The game ended 2: 3 from the perspective of Leverkusen. In the 2002/03 season, coach Klaus Augenthaler ordered the midfielder more and more into the defensive line. There he fought with the Brazilians Juan and Lúcio and Jens Nowotny for a place in the starting XI.

In the third year at Leverkusen, Balitsch only made eight appearances in the first half of the season. He was substituted on five times. Because of the growing international competition in the team, the defensive specialist decided to switch to the newly promoted 1. FSV Mainz 05 for the second half of the 2004/05 season . There he found his old strength and was only missing in three league games of Mainz. An unfortunate event for him occurred on matchday 28: Jürgen Klopp , FSV coach, brought in Balitsch for Fabian Gerber in the 37th minute , only to replace him 25 minutes later for Christoph Teinert .

After half a year in Mainz, Balitsch moved to Bundesliga club Hannover 96 in 2005 , with whom he received a contract until 2008, which he extended to 2010 on February 20, 2008, ahead of schedule. In his first season for Hanover, he quickly became a regular. With Christoph Dabrowski , Michael Delura and Altin Lala Balitsch formed the midfield block of the Hanoverians. In 2006/07 Balitsch played 33 of 34 possible games for Hannover. Only Jiří Štajner and Robert Enke had more missions. In the following year he achieved his best goal yield in one season with four goals in the league. He scored two hits with his head, the other two in the return leg against Karlsruher SC .

On the 16th matchday of the 2008/09 season there was an argument during the half-time break between Dieter Hecking and Balitsch, who had meanwhile become team captain due to an injury to Robert Enke , whereupon Hecking replaced him with Bastian Schulz and suspended until the winter break.

At Hannover 96 Balitsch usually played in the defensive midfield, but has also been used in various defensive positions and on the right flank.

For the 2010/11 season Balitsch left Hanover after five years and returned to Bayer 04 Leverkusen . There he could not win a regular place under coach Jupp Heynckes . In the majority of his 24 season appearances, Balitsch was substituted on in the final quarter of an hour. At the end of the season he was runner-up with Bayer Leverkusen and thus achieved the best placement in his Bundesliga career. Also in the 2011/12 season Balitsch remained a supplementary player under the new coach Robin Dutt . During the first half of the season he only made eight appearances, in which he was four times in the starting line-up. On December 19, 2011 Balitsch was released from training and match operations for unclear reasons and encouraged to look for a new club. 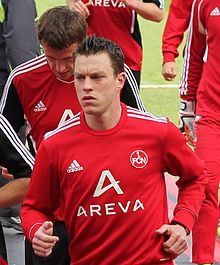 During the winter break, Balitsch moved to 1. FC Nürnberg , where he met coach Dieter Hecking again. Balitsch agreed with the club on a two-and-a-half year contract until June 30, 2014 and was given the number five on his back. After recovering from injury, he made his competitive debut for FCN on February 18, 2012 in a home win against 1. FC Köln . With the exception of one game - due to a yellow card suspension - he then played all the second round games up to the summer break in defensive midfield as a regular. He stayed that way throughout the 2012/13 season, in which he was only absent once again due to a yellow card suspension. Under the new coach Michael Wiesinger , he moved from midfield to the right defender in the course of the second half of the season. After five games in the following season, there was another falling out with the coach. He was suspended and transferred to the second team, in which he proved himself. After several discussions with the following coach Gertjan Verbeek , he was taken back to the Bundesliga squad on the last day of the first half of the season. Balitsch was also there at the beginning of the second half, but then a foot injury put him out of action for the next few days.

The second division FSV Frankfurt signed him for the 2014/15 season . In 28 league games for the FSV he scored a goal and ended the season with the team in 13th place in the final table.

Return to Waldhof Mannheim and end of career

Hanno Balitsch's farewell game in the Carl-Benz-Stadion Mannheim had to be interrupted due to a thunderstorm. The game ended with a 4: 3 for the team Hanno & Friends.

For the 2015/16 season, Balitsch returned for a year to SV Waldhof, with whom he became champion of the regional league, but missed promotion to the third division in relegation. Then he ended his active career.

On June 9, 2017, Balitsch said goodbye after a total of more than 400 first and second division games in a charity match with a selection team composed of former companions against the current team of SV Waldhof Mannheim . The proceeds from the game went to the Waldhof youth department. The “Hanno & Friends” team with former national players such as René Adler , Simon Rolfes , Stefan Kießling , Michael Tarnat , Mike Hanke and Per Mertesacker won the game 4: 3 in front of 2073 spectators in the Carl Benz Stadium .

Hanno Balitsch was in the U-16 selection team and went through the DFB youth up to the U-21 national team. With the U-18 team of the DFB he took part in the U-18 European Championship in 2000 and achieved third place with the team. He was used in three of four tournament games over the full distance.

In 2001 he played with the U-20 national team of the DFB at the U-20 World Cup in Argentina and played all four tournament games until the DFB-Elf were eliminated in the round of 16 against France.

At the U-21 European Championship in 2004 he was the captain of the DFB team, for which he played a total of 20 games.

In the German senior national team Balitsch was nominated for the friendly game against the Netherlands for the first time in November 2002 . His first and only appearance was in February 2003 when he played against Spain in a friendly in Palma . The game in which he came on for Frank Baumann in the 62nd minute was lost 3-1. He was in the squad again in April that year against Serbia-Montenegro, but was not used. In 2002 he played the DFL Allstar game with the DFB-Elf.

After the active career

Since August 2015, Balitsch has been an analyst and expert at the ZDF sports report and the current sports studio on ZDF . In February 2017, he also became assistant coach of the German U-19 national team.

In 2010 Hanno Balitsch took over the patronage of “Einfach Fußball”. The aim of the project is to establish partnerships between special schools and regular football clubs and to organize football offers that take place regularly and over the long term.