In his private life, Witzleben was an excellent musician and gifted violin player. The composer Gioachino Rossini once said to him: It's a shame that you are a soldier; as a musician you would play a bigger role.

Already ill in 1824 and sent on a cure, his activity as deputy war minister, which he began in 1832, promoted the serious illness to which he finally succumbed in 1837.

"In the confident expectation that you will apply yourselves to the service as best you can and train yourself to be a particularly useful officer, I want to support you with the acquisition of your equipage with 100 thalers."

In 1802 Witzleben became second lieutenant . During the battle of Jena and Auerstedt in 1806 he was taken prisoner of war , but was replaced in August 1807. The treatise Ideas for the Reorganization of the Light Infantry , which Witzleben had written on the light duty, caught Scharnhorst's attention , so that in December 1808 he joined the newly established Guard Hunters Battalion as a staff captain . At the beginning of 1812 Witzleben was promoted to major and fought on May 2, 1813 in the Battle of Großgörschen . During the fighting in France he rose to lieutenant colonel . In the spring of 1815 he was assigned to the General Staff in the Army of Field Marshal Blücher and then joined the North German Federal Corps as Colonel and Chief of the General Staff .

After the peace agreement, Witzleben was appointed inspector of the hunters and riflemen, and in 1817 he was made director of the third department in the war ministry . In 1818 he was promoted to major general and at the same time became adjutant general of King Friedrich Wilhelm III. and head of the military cabinet . In the following years, Witzleben became one of the king's trusted advisers and personal friends.

In 1821 Witzleben was made lieutenant general . After the resignation of the Prussian War Minister Hake in 1833, he became his successor. Here he mainly worked on the integration of the standing army with the Landwehr . He was also responsible for promoting the introduction of the firing needle and percussion rifle . He also made a contribution to the revision of the military penal code.

Job von Witzleben retired after a serious illness in 1835 and died on July 9, 1837 in Berlin, where the king dedicated a memorial to him that still exists today in the Invalidenfriedhof close to the Scharnhorst. His successor as Prussian Minister of War was General of the Infantry Gustav von Rauch , who after his death in 1841 was also buried in grave field C of the Invalidenfriedhof near Witzleben and Scharnhorst.

“The news of your husband's demise was unexpected and truly sad to me. I lament his early loss as sincerely as I had cause to appreciate his worth as a public servant and his proven attachment to My person. In showing you all my sympathy with your just pain, I reserve the right to honor the memory of the merits of the eternal one through proofs of my benevolence and through the care for his family. "

In the Prussian State Newspaper it said:

“His Excellency the Secret Minister of State and War, Adjutant General to His Majesty the King, Lieutenant General von Witzleben, departed this morning [...] with his death. In the noble man, king and state have suffered a great and generally recognized loss. "

Job von Witzleben was accepted into the Freemasonry in the course of his life . His mother box was the "Teutonia zur Weisheit" in Potsdam . This Masonic Lodge was assigned to the Great National Mother Lodge “To the Three Worlds” (GNML 3WK). 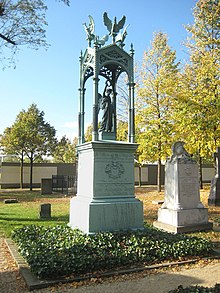 Grave site in the Invalidenfriedhof, Berlin 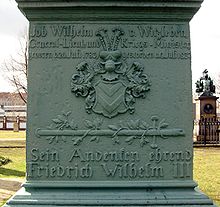 Detail of the tomb at the Invalidenfriedhof Berlin

In 1823 Witzleben received 20,000 thalers from the king  , with which he bought the Lietzensee and the surrounding area in Charlottenburg and created a summer residence and a public park from it. In 1827, in thanks for his work, he received the Charlottenburg honorary citizenship. The entire district around the Lietzensee officially bears the name Berlin-Witzleben , but the residents of the Witzleben station defended themselves in vain in 2002 against its renaming to Berlin Messe Nord / ICC station . In 1840 the family sold the property. In 1899 a terrain company built representative residential buildings there, in the middle of which the Lietzenseepark has been located ever since .

The 2676 hectare “Gut Liszkowo” (later: Witzleben ) near Wirsitz , which was given to the Minister of War by the King and which included the Witzleben, Augustenhof, Jobshöhe, Marienau and Erikfelde estates, has not been owned by the family since the end of World War II with his mansion but still today to the Minister of War Job von Witzleben.