The area is part of the Great Hungarian Plain and is traversed by the Tisza , into which the Maros flows. To the west of the Tisza are numerous swamps.

A small area of ​​217 km² (south of the Marosch and east of the Tisza) belonged to the historical region of Banat . 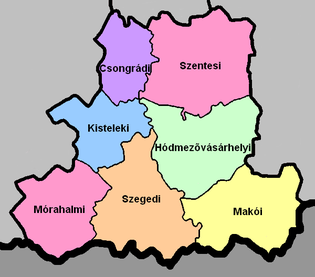 The current circles are:

With the government ordinance No. 218/2012 of August 13, 2012, the statistical small regions (Hungarian kistérség ) were abolished on January 1, 2013 and replaced by an approximately equal number of districts (Hungarian járás ). The small areas were retained for a while for planning and statistical purposes, but were finally abolished on February 25, 2014. Until the dissolution there were 7 small areas in the county. Four administrative units remained unchanged during the reform.

The following small areas ( kistérség ) existed in Csongrád County until the end of 2012 :

All places without a name are cities.

Population development of the county

It is noteworthy that the population has steadily decreased since 2006. Dates in bold are census results.

Population development of the districts

Except for the Szeged district, a negative population balance is evident for all districts.

The State Directorate of Museums of Csongrád-Csanád County is responsible for 4 county museums . The county seat is the city of Szeged .