The village of Neustadt / Spree (officially only Neustadt until 2017 ), Nowe Město / Sprjewja ​​in Upper Sorbian ? / i , with around 400 inhabitants, is the largest district of the municipality of Spreetal in the Bautzen district in east Saxony . Neustadt is located in the Sorbian settlement area in Upper Lusatia .

Neustadt lies on both sides of the Spree on the edge of the Neustädter Heide between the cities of Spremberg in the northwest, Weißwasser in the east and Hoyerswerda in the southwest. To the north of the village, the Struga , which comes from the Schleifer region , flows into the Spree. 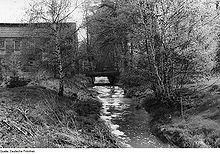 Former spinning mill on the Struga

There is evidence that Neustadt was first mentioned in 1433 as "Nuwinstad" in a court book of the city of Bautzen. The place was probably already laid out by Germans and Sorbs as a street village on the right of the Spree during the time of the German eastern settlement . It is possible that the town was founded by the Muskau rulership .

In a document from King Ferdinand , it was transferred to the Hoyerswerda registry office on March 19, 1544 . Since that time, the border runs able dominions and later the counties east of the village. In Neustadt and Riegel , Hoyerswerda operated two new hammer mills for processing the lawn iron ore from 1550/1560 . Both works replaced the only hammer mill in Nardt , which had been in existence for over 150 years and which was apparently abandoned. The Thirty Years War brought a turning point in iron production in Upper Lusatia. The hammer has been desolate since at least 1660 . The Hoyerswerdaer men operated in Döschko and hammer outworks that over time due to their location arcane looped and peasants were leased to the New Town.

After the Peace of Prague , Neustadt and the entire Lusatia fell to Saxony; At the Congress of Vienna it was decided that the part of Upper Lusatia in which Neustadt is also to be ceded to Prussia.

In 1568 Neustadt had 21 possessed men and two cottagers . In his chronicle of the town and rule of Hoyerswerda, published in 1744, Salomon Gottlob Frentzel lists “2 judges' goods, 10 service guards, 1 barn, 7 häusler, (6 desert houses ), a forester's house, a forwerck and shepherd's farm” for Neustadt  . At that time, Döschko had “two estates and, in the meantime, a manorial forwerck”. Neustadt and Döschko together had 13 possessed men, three gardeners and 12 cottagers in 1777 . Compared to 1568, the number of farms has increased, but the average land ownership has decreased at the same time.

Christian Konrad, a Sorbian-speaking teacher in Neustadt from 1836 to 1881, wrote in the "Chronicle of School and Village Neustadt" in 1864: "The number of souls in Neustadt, Hammer, and Luschken is 340 - 64 house numbers." Another note: “When I moved in, the village of Neustadt was no bigger than from the bridge over the Spree to the school. Most of the northern houses up to the Altmühle were built in my time. ”The school was roughly in the center of the village today.

For a long time, Sorbian was the main language spoken in Neustadt . Teacher Konrad noted in 1869: “The mother tongue is really Wendish here and is mostly read and taught Wendish in school. There are an average of 4 German children a year who soon understand something Wendish. ”A good 15 years later, according to Arnošt Mukas' statistics published in 1885 on the Upper Lusatian Sorbs in Prussia, Neustadt has a completely Sorbian population .

Alfred Ender, who had no knowledge of Sorbian and had been a teacher in Neustadt from around 1900, “did not have a single child of German descent in [the] school” until 1908. It took some ingenuity "so that only at least the bare minimum is achieved."

Other teachers noted in the school chronicle that "the children who arrive at Easter [1914] do not [understand] a word of German", and even in 1942 Sorbian "is still colloquial in many families".

According to Ernst Tschernik , the Sorbian-speaking population was still 77.5% in 1956.

In 1992 the local council called for the creation of a coat of arms. The suggestion of the Heimatverein Neustadt / Spree prevailed and was approved by the Dresden Regional Council. The yellow background symbolizes the sandy soil on which the village was built. Oak leaves and acorns stand for the abundance of forests and the bricks for brick production that has existed for over 150 years. The blue waves represent the Spree, whose power was used for centuries for mills and the iron hammer (symbolized by the black water wheel).

The coat of arms shown on the left differs from the approved coat of arms in that the waves have been reduced in the lower part to make room for the year of the first mention. 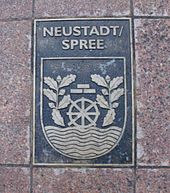 Neustadt is the smallest member in terms of residents of the international Neustadt working group in Europe , to which 37 cities and municipalities named Neustadt in seven European countries (Germany, Austria, Hungary, Czech Republic, Slovakia, Poland and the Netherlands) belong. In summer 2009 Neustadt / Spree hosted the 31st Neustadttreffen.

Neustadt was originally a place dominated by heather farmers . The low fertility of the soil made further sources of income necessary, as evidenced by the name of the Hammer part of the village, for example. Bricks have been baked in Neustadt since the 1840s. The small brick factory was acquired by Matthes Krautz around 1880. Thanks to favorable location factors, it was subsequently able to be enlarged and converted into a concrete plant. Around 1890, a paper mill was built on the Ruhlmühle upstream . This was converted into a wood grinding shop after 1945 and closed in 1966. The nearby Boxberg , Schwarze Pump and Trattendorf power plants and several opencast mines became important employers over the next few decades. The concrete plant, which was nationalized in 1972, was returned to the Krautz family in 1990 and modernized by them.

While there used to be a tavern on each side of the Spree, Neustadt has had two neighboring restaurants in the Hammer since the 1990s, which are geared towards tourism.

Districts of the municipality of Spreetal