Nikolai Ivanovich Chabibulin ( Russian: Николай Иванович Хабибулин ; English transcription: Nikolai Ivanovich Khabibulin ; born January 13, 1973 in Sverdlovsk , Russian SFSR ) is a former Russian ice hockey goalkeeper . Chabibulin completed over 800 games for the Winnipeg Jets , Phoenix Coyotes , Tampa Bay Lightning , Chicago Blackhawks and Edmonton Oilers in the National Hockey League and won the Stanley Cup in 2004 with the Tampa Bay Lightning . In 1992 he became Olympic champion with the national ice hockey team of the CIS and was followed by a gold medal with a bronze medal with the Russian national team at the 2002 Winter Olympics .

Chabibulin was selected in the ninth round of the 1992 NHL Entry Draft at a total of 204th position by the Winnipeg Jets . Before that, he played for the Russian club HK CSKA Moscow . From 1996 to 1999 he was in goal for Phoenix Coyotes . After contract disputes with his club, he was forced to play for the IHL club Long Beach Ice Dogs in the 1999/2000 season . That season he was awarded the James Gatschene Memorial Trophy as the best player in the league. After the negotiations for a contract extension with the Phoenix Coyotes had failed, Chabibulin was given on March 5, 2001 in an exchange deal to the Tampa Bay Lightning . With this team he won the Stanley Cup as the first Russian goalie ever in the 2003/04 season . He achieved the lowest average goal conceded in the history of the Lightning and was able to book five shutouts in the playoffs .

He spent the lockout of the 2004/2005 season at the Russian club Ak Bars Kazan , with whom he was also able to reach the play-offs . There he shared the goalkeeper position with Fred Brathwaite . He convinced with a low goal average of 1.65. As a free agent , Chabibulin returned to the NHL in 2005/06 to take on the position of goalkeeper with the Chicago Blackhawks . In this season Chabibulin was able to complete his 500th NHL game. However, he had to watch some games this season after groin and knee injuries. In the 2006/07 season he was number one ahead of his substitute Patrick Lalime . After his contract with the Blackhawks was not renewed, he signed on July 1, 2009 as a free agent with the Edmonton Oilers . In the 2011/12 season he achieved his 300th victory in the NHL.

In July 2013, he signed a $ 2 million one-year deal with the Chicago Blackhawks. This contract was not renewed, so from July 2014 Chabibulin was looking for a new employer as a free agent . On November 13, 2015, Chabibulin announced his resignation. 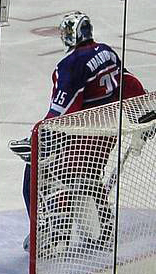 Chabibulin in the Russian national jersey at the 2002 Olympics

On his goalkeeper mask, Chabibulin had the words “Bulin Wall” (his nickname based on the Berlin Wall ) and a picture of a wall.