The 2001/02 NHL season was the 85th season of the National Hockey League (NHL) . Stanley Cup winners were the Detroit Red Wings with a 4-1 win over the Carolina Hurricanes . The German Uwe Krupp was a substitute in the Detroit squad and won his second cup after winning the Colorado Avalanche in 1996.

His 52 goals laid the foundation for Jarome Iginla as top scorer. Adam Oates was the best preparer of the season with 64 assists. As in the previous season, Peter Bondra led the score for the overpaid goals with 17. Best outnumbered was Brian Rolston with 9 hits. 21.5% of Daniel Brière's shots found their way into the goal. With 355 shots the most from Bill Guerin . With +40 Chris Chelios led the plus / minus rating. With 354 penalty minutes, Peter Worrell clearly outperformed the bad boys of previous years. Sergei Gonchar scored 26 goals as a defender , while Nicklas Lidström provided 50 assists. Both scored 59 points, making them the most successful defenders.

His 41 assists made Dany Heatley the top scorer with 67 points. As a scorer, Ilya Kovalchuk was the most successful with 29 goals. Matt Bradley led the plus / minus rating of the rookies with +22. None of the newbies spent more time than Chris Neil with his 231 penalty minutes in the penalty box. 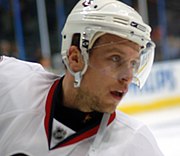 Chris Chelios was once again on the First All-Star Team after five years .

Ilja Kovalchuk , one of two Thrashers in the All-Rookie Team.