Mats Johan Sundin (born February 13, 1971 in Bromma ) is a former Swedish ice hockey player who, in the course of his active career between 1990 and 2009, played for the Nordiques de Québec , Toronto Maple Leafs and Vancouver Canucks in the National Hockey League on the position of the center has played. Sundin was the first European to be selected in the first overall position in an NHL Entry Draft . In the course of his career he completed 1346 NHL games, in which he scored 1349 points scorer. He was also the longest-serving, non-North American-born captain on an NHL team. At the international level, the Swede won the gold medal at the 2006 Winter Olympics and the 1991 , 1992 and 1998 World Championships . He was inducted into the Hockey Hall of Fame in November 2012 .

Sundin began his career in the youth of the multiple Swedish champions Djurgårdens IF . After he spent the 1988/89 season with the then second division club Nacka HK , he returned to Djurgårdens IF in Stockholm in the summer of 1989 . In the same year, the Nordiques de Québec secured the transfer rights to the then 18-year-old during the NHL Entry Draft in 1989 . Those in charge of the Nordiques chose him as the first overall . Sundin was the first European to be selected as the overall first during an NHL Entry Draft . The 1989/90 season was his last season in Europe for the time being, before the attacker moved to North America for the National Hockey League.

Sundin was able to win the Swedish championship with Djurgården at the end in 1990. In his first season in the NHL with the Nordiques de Québec, the Swede was able to score 59 points in 80 league games , making him the team's best-scorer behind Joe Sakic . He scored his first NHL goal on October 4, 1990 in a game against the Hartford Whalers .

In the following years Sundin was able to improve further and in the 1992/93 season in 86 games to score 118 times. This was his most successful season in the National Hockey League. Sundin also received the post-season Viking Award for best Swedish player in the NHL. He was able to defend this title in 1994. On June 28, 1994 Sundin was delivered to the Toronto Maple Leafs along with Garth Butcher , Todd Warriner and a first-round draft pick during the 1994 NHL Entry Draft . In return, the Nordiques de Québec received the players Wendel Clark , Sylvain Lefebvre and Landon Wilson , as well as a first-round draft pick in 1994. 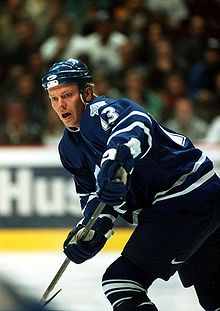 Sundin in the jersey of the Toronto Maple Leafs

Since the 1994/95 season was partially canceled due to the players' strike, Sundin spent the free time at his home club Djurgårdens IF in Sweden. There, however, he only played twelve games and returned to North America after the end of the strike. In Toronto he finished the current season. In 1997, Sundin was named captain of the Toronto Maple Leafs . This made him the first European captain of the Maple Leafs. In the same year he won again the Viking Award and was nominated for the second time for the NHL All-Star Game after 1996 .

His first successes at club level could achieve Sundin during the season 1998/99 , when he was able to move back into the play-offs after two years with the Maple Leafs as runner-up in the Northeast Division . There he and his team defeated the Philadelphia Flyers in the first round and the Pittsburgh Penguins in the second round . Thus, the Maple Leafs moved into the Conference Finals, which they lost to the Buffalo Sabers . This was the biggest success Sundin could achieve with the Toronto Maple Leafs in his career. In the following two seasons 1999/00 and 2000/01 he was eliminated with his club in the second round of the play-offs. On March 10, 2003, during his ninth season with the Toronto Maple Leafs and his overall 13th in the NHL, Mats Sundin reached the 1000-point mark as the first Swede . He is one of the few players who has been able to do this in NHL history to date.

Three years later he scored his 500th goal in the NHL in the game against the Calgary Flames , making him the 35th player to reach this "sound barrier". Sundin stayed with the Maple Leafs until the summer of 2008, when he signed a two-year contract with the Vancouver Canucks as a free agent , which should bring him $ 20 million. That made him one of the highest-paid NHL players of all time. Before that, he had already received offers from his previous club, the Toronto Maple Leafs, the New York Rangers and the Montréal Canadiens , but decided in December 2008 for the Canucks.

In Vancouver he met his two compatriots and former national team colleagues, Daniel and Henrik Sedin . He played his first game for the Canucks on January 7, 2009. Only a few months later, at the end of September 2009, the now 38-year-old Sundin declared his career over at a press conference in Stockholm. He based this decision on his age. His performance had waned in the last season of his career. He scored 36 scorer points in 49 league games for the Vancouver Canucks and was thus not the hoped-for reinforcement of the team. During his career, Sundin took part in eight All-Star Games of the National Hockey League between 1996 and 2004. He also won the Viking Award four times and in 2008 the Mark Messier Leadership Award for the player with the best leadership skills in the NHL. There were also two nominations for the NHL Second All-Star Team in 2002 and 2004.

On November 12, 2012, Mats Sundin was inducted into the Hockey Hall of Fame .

In total, Sundin completed 74 international matches for the Swedish national team, scoring 36 goals and 49 assists . He played his first tournament for the senior national team in 1991 when he took part in the World Cup with Sweden . With a first place in the championship round, his team won the gold medal. The striker was also the top scorer of the World Cup. A little later he started with Sweden at the Canada Cup in 1991 . There he reached fourth place with his team after the group stage and was eliminated in the subsequent semifinals with 0: 4 against the USA . A year later he took part in the 1992 World Cup. By winning the gold medal, Sundin also celebrated his second world title with the Swedish national team. Sundin, who scored eight scorer points in this tournament, was also named best striker.

After he missed the 1993 World Cup due to the play-off participation of his Nordiques de Québec, he won the 1994 World Cup bronze. While the semi-finals were lost 6-0 to eventual world champions Canada , he and Team Sweden won the game for 3rd place 7-2 against the USA. After the tournament, Sundin was named top scorer of the World Cup for the second time since 1991. Then he only took part in a world championship again in 1998 . After winning the gold medal again and being appointed to the all-star team of the World Cup, Sundin rose to become one of Sweden's most successful national players.

This was followed by a bronze medal at the 2001 World Cup , participation in the 2002 Winter Olympics and a silver medal at the 2003 World Cup . Sundin played his last tournament at international level in 2006 when he took part in the Winter Olympics for the third time. With a 3-2 final win over Finland , he won Olympic gold with Sweden. This is the greatest achievement of his career. Sundin was able to score eight times in eight games.