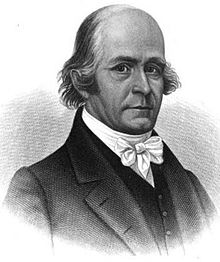 Paul Brigham (born January 17, 1746 in Coventry , Colony of Connecticut , † June 15, 1824 in Norwich , Vermont ) was an American politician, lawyer and governor of the state of Vermont.

Born in Connecticut Paul Brigham served like most Americans of his generation in the Continental Army during the American Revolution , where he is the captain of the 8th Connecticut Regiment and as a participant of the oath of Valley Forge to the rank of general brought. On October 6, 1768, he married Lydia Sawyer in the First Congregational Church in Coventry. In the course of the war campaigns he got to know and appreciate the neighboring state of Vermont and then settled in Norwich in May 1781 and 1782.

Soon after, Brigham became part of the state's prominent upper class , representing its interests at both local and state levels. As a representative of Norwich, he sat in the Vermont House of Representatives , took part in the constitutional deliberations of the state and served as Chief Justice of Windsor County (1801).

He was first elected to the Board of Governors in 1792. He held this seat until 1796, when he was appointed lieutenant governor . Notably, despite all political changes, Brigham remained in office until 1813. In that year he had a majority of the votes with 49% of the vote, but his opponent William Chamberlain , who was counted among the federalists, still got 48 percent. The decision was then left to the legislature , which Chamberlain installed. Two years later, Brigham returned to the office again, serving it until 1820.

In 1797, however, he was more involuntarily given higher political honors. Since Thomas Chittenden had died unexpectedly, Brigham moved up and represented Vermont as governor for almost two months (August 25 - October 16) until the inauguration of Isaac Tichenor . He also served as an elector in the 1792 presidential election .

Brigham died in Norwich on June 15, 1824 at the age of 78. He left his daughter Lydia Brigham Lathrop (married to Joseph Lathrop) from his marriage to Lydia Sawyer.