Chaco is a province in the north of Argentina . The capital of the province is Resistencia on the Río Paraná near the city of Corrientes .

The province is located in the area known as Gran Chaco , which consists of dry forest in the west and savannah in the east . Precipitation decreases from east to west and is concentrated in the summer half-year, while in winter there are frequent periods of drought.

Crocodiles , monkeys , tarantulas and a wide variety of snakes such as boas , anacondas and rattlesnakes are found in the Chaco .

A million people live in the province of Chaco. The population is quite diverse. Many Paraguayans and Spaniards live here. In addition, Mennonites from Russia, Germany and Canada have settled, who are mainly engaged in agriculture.

The population is concentrated in the southeast half of the province, in particular on an axis that roughly coincides with the Ruta Nacional 81 and on which the two largest cities Resistencia and Presidencia Roque Sáenz Peña are located.

At the end of the 19th century there were repeated disputes between Argentina and Paraguay over the affiliation of the chaco. The current province of Chaco emerged in 1884 from the division of the Chaco territory into Chaco and Formosa. It was not until August 8, 1951 that the territory was raised to a province. 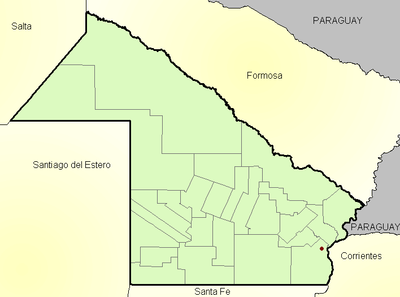 Subtropical agriculture (cotton, tobacco, soy) and agro-industry dominate the humid east of the province and the region around Juan José Castelli. Is also the Forestry important.