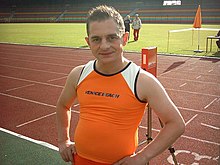 Volker Michalowski is the son of a concrete engineer and grew up in Dresden. In his youth he refused to join the FDJ . Through his father, he received an apprenticeship as a maintenance mechanic at his employer, the VEB BMK Coal and Energy . Michalowski dedicated himself to pacifism ; he was involved in the Young Congregation and was in contact with the Church from below . In 1989 he and his friends founded a punk band called Fehlschicht , which could occasionally perform in church rooms.

In 1989 he was arrested three times by the Ministry of State Security : on February 13th at the beginning of a protest against an official speech on the anniversary of the air raids on Dresden , at the beginning of June during a protest against the Tian'anmen massacre and on October 6th at one Demonstration on the 40th anniversary of the GDR . As a result of the latter involvement, Michalowski was taken to Bautzen I prison, where he was held for three days.

In 1990 he refused basic military service. His application for conscientious objection was not immediately approved; therefore he was picked up by police officers according to current law and had to spend a week in the barracks. Today he himself describes this time as “the hell of my life”. After his KDV application was approved, he did his community service in a facility for physically handicapped people.

From 1990 to 1992 Volker Michalowski took acting lessons from Falk Weselski and studied from 1996 to 2001 at the Hamburg University of Fine Arts . In 2003 he took an acting course at the Ludwigsburg Film Academy . From January 2005, the television station Sat.1 broadcast its comedy show Zack! Made-to-measure comedy produced in four seasons through 2008.

In addition to his comedy role on private television, he played in several films in the crime series Tatort and can also be seen in the cinema and theater. In the St. Pauli Theater he participated in several plays, in 2006 as a writing expert in the film The Lives of Others and in the 2007 festival season of the Bad Hersfeld Festival he played the fool's Probstein in Shakespeare's comedy As You Like It . In 2009 he played a small role in Quentin Tarantino's film Inglourious Basterds .

Michalowski has been involved in the SWR children's program production Motzgurke-TV since 2012 , where he plays the always bad-tempered caretaker Hartmut Griesgrämer, who is only called the Motzgurke behind his back by the children in the neighborhood . Not only his acting skills, but above all his small height of 1.56 m predestined him for the stage role of Egon Olsen in the play for the film series Die Olsenbande in the Boulevardtheater Dresden .

Together with Mathias Schlung , Bürger Lars Dietrich and Tanja Wenzel , he was on stage in Dietrich's Democratic Republic in 2012 .

In 2016 he took part in the 149th edition of the ARD - the game show Who knows something? at the side of team captain Bernhard Hoëcker .

He got his nickname "Zack" from a former Russian teacher who borrowed him from a character in the opera Hoffmann's Tales .