The loosestrife family (Lythraceae), also blood loosestrife family , form a plant family in the order of the myrtle-like (Myrtales). The purple loosestrife, together with the swamp quendel and the water nut, are the only species of this family of plants found in Central Europe . The oldest fossil finds , which are assigned to the family Lythraceae, are seeds from the Cretaceous Mexico and from the Paleocene of southern England , and fossil fruits , leaves and pollen have also been found. 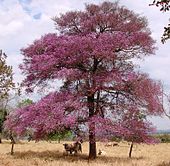 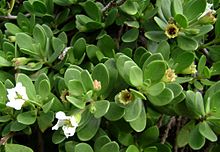 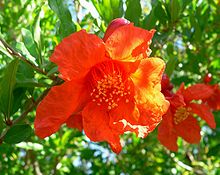 In the temperate areas it is an annual to perennial herbaceous plant ; that is most of the species. More rarely, this is the case only in the tropics , there are woody taxa that grow as shrubs and trees . The young branches are often square.

The leaves are mostly opposite, less often they are alternate and spiral or whorled. The simple leaf blades are pinnate and usually have a whole edge. Stipules are absent or just small.

The flowers are solitary or in axillary or terminal zymous , racemose , paniculate inflorescences or in pseudo whorls.

The hermaphroditic flowers are radially symmetrical to zygomorphic and usually have a double flower envelope (perianth). Hypanthium is often present. The number of flower organs in the individual petal circles is very variable in this family - from 3 to 16. There may be a secondary chalice. The membranous to thick leathery sepals are mostly fused and often durable. The free petals are often wrinkled and may be nailed; they are seldom missing. There are (4 to) 8 to 16 (up to 100) free, fertile stamens . Usually two to four (rarely up to six) carpels are a syncarp, from constant to constant above (see subfamilies), two to six or multi-chambered ovary grown. In each ovary chamber there are many ovules in central angled placentation. Heterostyly is common here. The stylus ends in a heady, conical-shield-shaped or point-shaped scar. The pollination is effected by insects ( Entomophilie ).

Leathery capsule fruits are usually formed, which usually open when ripe. Berry-like fruits are produced less often. The fruits are mostly partially or completely enveloped by the durable bloom cladding sheets. The fruits usually contain many seeds. The rarely winged seeds contain no endosperm and have a straight embryo with two flat or rolled up cotyledons .

The chromosomes are 1 to 4 µm in length. The basic chromosome number is x = mostly 8 (5 to 11). Polyploidy is often demonstrated.

They are widespread in tropical and subtropical areas of the world, some species are common in the temperate zones.

Among the loosestrife there are some types of plants that provide coloring. The best known species is the henna ( Lawsonia inermis ), from which henna is obtained. Other examples are Woodfordia fruticosa , whose leaves are red in color. Yellow pigments are produced from the bark and wood of some Lafoensia species.

The pomegranate provides fruit and is used as an ornamental plant. The fruits of the water nut are eaten as a vegetable in East Asia, Malaysia and India. The leaves of Lythrum portula are eaten raw or cooked. The seeds of Ammannia multiflora are ground and used to bake cakes. From the seeds of Cuphea viscosissima oil can be obtained as edible oil or for the cosmetic industry.