The village of Affoldern is part of the municipality of Edertal in northern Hesse and is located in the Kellerwald-Edersee nature park in the Eder valley below the Edersee .

Affoldern is about 4 kilometers south of the town of Waldeck and 6 kilometers north of Bad Wildungen , at an altitude of 196 meters above sea level. The highest elevation in the district is the Rabenstein to the south at 439 meters ; it forms the southern flank of the Rabensteinpforte , in which the Eder breaks through from the Edersee trough into the Wegaer Ederaue (natural area 341.51). The Edersee dam is only about 2.5 kilometers north of the village. Affoldern is located directly at the lower compensation basin, the so-called Affolderner See .

The name Affoldern comes from Old High German and is derived from the apple trees (ahd. Affoltra ) that were present there when the settlement was founded . Affoldern is first mentioned in a document under the name Affeltra around 850 AD, when a certain Gozmar sold his goods and servants in Affoldern and in the six villages of Gleichen (gilihha), Buhlen (buohloha), Viermünden (fiormenni), Schreufa (scroufi) , groves (hagini) and flours (mehilina) the convent Fulda as a gift left. As part of a swap, the property of the Fulda Monastery in Affoldern then passed to Count Konrad the Elder († 906) around 900 .

The tower of the Protestant village church , a defensive tower , dates from the 13th century. After the war had been destroyed, the nave was rebuilt in 1950/51; two altar wings from the end of the 15th century are now in the museum in Bad Wildungen . Up until 1848 there was a gold panning in Affoldern on the Eder. 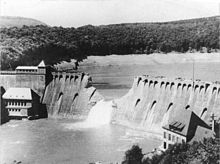 On the night of May 17, 1943, the Edertalsperre dam broke after a British roll-bomb attack , and the water from the Edersee poured through the narrow valley of the Eder. Well over half of all the houses in Affoldern were destroyed. 14 men, women and children were killed. Days later the water was meters high in the streets. On the 50th anniversary in 1993, this catastrophe was commemorated with an impressive exhibition. At 1:45 a.m., the Marienbell from 1411 rang to commemorate the accident. At the village community center, the memorial by the Swiss sculptor Arnold d'Altri commemorates the victims who perished in the floods.

The compensation basin, the Affolderner See , which was expanded in 1973 with its species-rich flora and fauna , is a popular destination for anglers and offers fishing for brown and rainbow trout. The largest rainbow trout caught in 2000 weighed 11 pounds and was 70 cm long. The bird sanctuary in the southern part of the Affolderner See is home to numerous songbirds and water birds.

Affoldern was merged on December 31, 1971 as part of the regional reform with other communities in the Edertal to form the greater community of Edertal . In 2000 the village celebrated its 1150th anniversary.

In the poem Affoldersches Elysium , Johann Christoph Werner Egeln (pastor in Affoldern from 1819 to 1840) describes his impressions of life in and around Affoldern.

The Edertal Forestry Office is based in Affoldern. Agriculture still plays an even less important role today. Not least because of the proximity to the Edersee and the Kellerwald-Edersee National Park, which extends to the edge of the village, tourism is gaining in importance. There are numerous overnight accommodations in hotels and inns in the village; In the immediate vicinity there are also two campsites below the weir. Tennis and sports fields are available for sporting activities, as is the Ederauenweg, which is used by hikers, cyclists and inline skaters.

The nearby section from Wega to Korbach of the former Wabern – Brilon Wald railway was closed in the 1980s, so that today Affoldern can only be reached by public transport by bus.