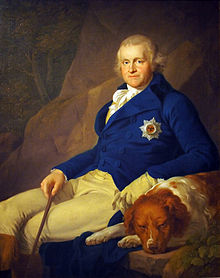 Carl August was the eldest son of Duke Ernst August II. Constantine (Duke of the two states Saxe-Weimar and Saxe-Eisenach ) and his wife Anna Amalia , a princess of Braunschweig-Wolfenbüttel . He lost his father a year after he was born. Under the tutelage of his clever, open-minded and art-loving mother, the hereditary prince's upbringing lay in different hands, most recently also in that of the poet Christoph Martin Wieland , whom the Duchess brought to Weimar from the University of Erfurt . Under the supervision of his tutor Johann Eustach von Görtz , Carl August went on an educational trip to France in 1774 and met with Melchior Grimm . On the return journey he visited the court in Darmstadt , where he became engaged to Princess Luise , who was the same age . The trip was then interrupted in Frankfurt because the Hereditary Prince wanted to get to know the famous poet Johann Wolfgang Goethe , whom he invited to Weimar on this occasion. Goethe fulfilled his promise and arrived in Weimar on November 7, 1775. A deep friendship soon developed between him and the young duke. The duke then gave him high government offices and obtained an imperial letter of nobility for Goethe in 1782 . On his 18th birthday, Carl August was declared of legal age and married Princess Luise on October 3, 1775 in Karlsruhe . This connection was not a happy one. During his now well-known escapades, Carl August found the support of his new friend Goethe (who, among other things, took care of several illegitimate children and their mothers). The public humiliation of his wife resulted in the tolerated extramarital relationship with the actress Karoline Jagemann . It was not until 1783 that Luise gave birth to Prince Carl Friedrich (Saxony-Weimar-Eisenach) .

On February 5, 1782 he became a Freemason in the Amalia Lodge in Weimar and in December of the same year under the name "a Falcone albo" he became a Knight of Strict Observance . At his endeavor, the Weimar Lodge, which had been inactive since 1782, was reopened in 1808. On February 10, 1783, he joined the Order of Illuminati with the name " Aeschylus " and rose to "regent" in it.

The Prussian King Friedrich II made him Knight of the Black Eagle Order on January 19, 1786 .

The activity in his small country was not enough for the bustling young duke. With the attempt to found a princes' union as a counterweight to the Prussian-Austrian dualism , he entered imperial politics, but had little success with it. In 1787 he took part in the Prussian invasion of Holland as a volunteer accompanied by the Prussian commander in chief, Duke Karl Wilhelm Ferdinand . He entered the Prussian service, became major general of the cavalry and on December 16, 1787 became chief of the cuirassier regiment "von Rohr" No. 6 .

The Austrian Netherlands was initially affected by the revolution that broke out in France in 1789 ( Brabant Revolution ), but Hungary was also on the verge of open revolt against Austrian rule when Emperor Joseph II died in 1790. A group of dissatisfied Hungarian nobles offered Carl August the St. Stephen's Crown , but Goethe successfully advised him not to accept it.

Time of the Revolutionary and Liberation Wars

With his regiment, Carl August took part in the campaign against France in the campaign from June 1792 to December 1793. During the subsequent retreat he led the avant-garde . For this he received the rank of lieutenant general on January 11, 1794 . However, he resigned from the army due to differences of opinion with Friedrich Wilhelm II . Only after Friedrich Wilhelm III took office. Carl August returned to Prussian service and was appointed Inspector General of the Magdeburg Cavalry Inspection on August 21, 1798. On May 20, 1802, he was promoted to general of the cavalry . During the Fourth Coalition War , in October 1806, he commanded the advance guard of the main Prussian army. When Prussia suffered devastating defeats in the battles of Jena and Auerstedt on October 13 , Carl August's corps was at Ilmenau as a result of a change in the campaign plan . While the French looted Weimar, it joined the retreat under Blücher . Carl August was lucky enough to avoid being deposed by Napoleon in December 1806 when he resigned from his command and joined the Rhine Confederation . After changing sides, Carl August had to let his soldiers fight Prussia in front of Kolberg .

After the Battle of the Nations near Leipzig, Karl August went to the headquarters of the coalition against Napoleon in Frankfurt am Main and received supreme command of the III on November 24, 1813. German Army Corps. This was part of the Northern Army and consisted of around 24,000 line troops and 20,000 Landwehr men . In mid-January 1814 he was with his corps in Holland, where Carl August also took over the supreme command in the Netherlands and from there he moved into Brussels on February 7, 1814 . At the end of March, Carl August and his troops besieged Maubeuge without success . When the coalition troops moved into Paris, an armistice was reached on April 9, 1814, and Carl August resigned supreme command on April 20, 1814. In recognition of his many years of service, the King of Prussia appointed him chief of the 8th Cuirassier Regiment on September 15, 1822 .

1804, the son of Carl August, the crown prince had Carl Friedrich , the Russian Grand Duchess Maria Pavlovna , daughter of the 1,801 murdered Tsar Paul I and sister of his successor Alexander I , married. Carl August owed his elevation to Grand Duke at the Congress of Vienna in 1815 (meeting from September 18, 1814 to June 9, 1815) to the influence of the Tsar and his own consistent national stance . In addition, the Grand Duchy experienced a considerable expansion of territory.

The Duke ruled according to the principles of enlightened absolutism and with a feeling for the social currents of his time. In 1815 he did not prevent the establishment of the German fraternities in Jena. Saxony-Weimar-Eisenach was the first German state to receive a state constitution in 1816 , which, among other things, granted its subjects freedom of the press and the right to freedom of expression . He then became a promoter of the constitutional monarchy . In 1817 he did not let the Jena students celebrate the Wartburg Festival without hesitation . However, the Carlsbad resolutions in 1819 also affected Carl August's liberal policies and forced him to act cautiously.

Politically, the Grand Duke stuck to the old ties to Russia and Prussia. This line was also followed by his son Carl Friedrich, whose daughters Maria and Augusta married Prussian princes, Maria Prinz Karl and Augusta Prinz Wilhelm , the future German emperor. Carl August did not live to see the second wedding. He died on the return journey from Berlin, where he had celebrated the birth of the first son of Mary, on June 14, 1828 at the Prussian stud Graditz in the arms of his adjutant Friedrich von Germar . With great sympathy from the Weimar population, he was buried in the Princely Crypt of the Weimar Historical Cemetery.

Coffin of the Grand Duke in the Princely Crypt Weimar

Carl August's life's work did not go down in history because of particular political or military successes. Instead, following in the footsteps of his mother and in the wake of his friend Goethe, he became a formative patron and patron of the epoch that later became known as the Weimar Classic . Christoph Martin Wieland had preceded Goethe at the court of Weimar , later - at the instigation of his friend and admirer Goethe - Herder also followed . However, Herder was not supported by the duke in the church and school reforms to the extent he had hoped. This resulted in a temporarily tense relationship because of Herder's democracy . Schiller later also came to the Weimar Musenhof . Jena also belonged to the Grand Duchy of Saxony-Weimar-Eisenach , where at the same time a second center of literature and philosophy existed with Fichte , Hegel and Schelling as well as the brothers Friedrich and August Wilhelm Schlegel , based on Goethe's motto: “Weimar - Jena a big city which has a lot of good things at both ends. "

Around 1785 he founded the Weimar military library .

He had an extra-marital relationship with the actress Karoline Jagemann , from which the son Karl von Heygendorff, born in 1806, emerged .