This article deals with the satirical-grotesque play from 1894. For the film adaptation from 1982 see Love Council . 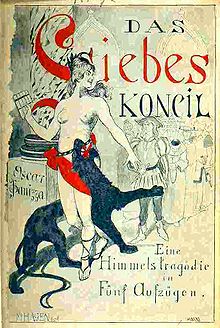 Cover picture of the third edition of the Love Council published by Jakob Schabelitz in Zurich in 1897 , artist: Max Hagen .

The Love Council is a satirical - grotesque drama by Oskar Panizza from 1894.

Panizza's main work is a radically anti-Catholic satire that explains the sudden appearance of syphilis at the end of the 15th century as a divine commission from the devil.

Because of the "heavenly tragedy" Panizza was sentenced to a year in prison for blasphemy in 1895 and then went into exile in Switzerland. The play, which is banned in Germany, was published there in three editions by Jakob Schabelitz in Zurich until 1897 and only premiered on a small stage in Vienna in 1967. It first appeared on a big stage in 1969 at the Théâtre de Paris , directed by Jorge Lavelli . Werner Schroeter filmed it in 1982 under the title Love Council .

The scenes of the action are heaven , hell and the court of the Borgia Pope Alexander VI. in the year 1495. God the Father , a senile and frail old man, the feeble and debilitating Christ and the hardened Virgin Mary receive news of scandalous conditions on earth, especially in Naples, and of immoral orgies at the court of Pope Alexander II. They take part for Easter the Vatican Palace themselves and witness obscene games and intrigues of court society. That is why, supported by Mary Magdalene and the Holy Spirit, they negotiate a deal with the devil : The devil is supposed to invent a terrible punishment, which should immediately follow carnal sin , but which should leave the souls of people capable of redemption , since God's creative power has been used up and he can no longer create new people - he is therefore dependent on the existing ones. In return, the devil demands a splendid portal for the run-down hell, the right to unannounced consultation hours with God and above all the freedom to spread one's thoughts, because “if someone thinks and is no longer allowed to communicate his thoughts to others, that is the most hideous of all tortures. ”The punishment devised by the devil is now the“ lust epidemic ”syphilis. In order to bring this to earth, the devil begets with Salome , the most sly figure in Hell, the "woman", an irresistibly beautiful woman who first the Pope, then the cardinals, the bishops and finally the rest of the church hierarchy with the disease infected, which is rapidly spreading throughout humanity.

The main influences on the love council were the play Germania, published in 1800 under the pseudonym Pater Elias , a tragedy with similar motifs. Other extensive models, named by Panizza himself, are Goethe's Faust , La Guerre des Dieux ancien et modern from Évariste de Forges de Parny , Sebastian Sailer's case of Lucifer from the second half of the 18th century and the Jesuit dramas with their heaven and hell scenes and the allegorical ones Representations of virtues and vices . The love council is dedicated to the memory of Ulrich von Hutten , who suffered from syphilis and died from it after a long suffering.

The process of the love council

Oskar Panizza with his dog Puzzi (around 1897).

Anti-Catholic satire became the biggest literary scandal of the 1890s. In October 1894 the love council appeared at Jakob Schabelitz's in Zurich. Panizza sent review copies to journalists and friends, so that the book became a much-discussed literary topic before it even hit the German market. Theodor Fontane , Detlev von Liliencron , Otto Julius Bierbaum and others reacted enthusiastically to the spectacular work.

The love council was only available in bookstores for a few weeks: after a review in the Allgemeine Zeitung , the police confiscated all copies accessible in Germany on January 8, 1895, and the Munich public prosecutor under Baron von Sartor brought charges of blasphemy based on Section 166 of the Reich Criminal Code . One problem was proving that the work printed in Switzerland had even found readers in Germany. Finally, two Munich booksellers declared that they had sold 23 copies and a police officer from Leipzig made a declaration that they had read the book and "taken offense" at its contents - he signed his advertisement with "i. A. Müller ".

The case went through the German press. Panizza found advocates among liberal and social democratic journalists, but intense hostility in conservative newspapers. Even Thomas Mann , who Panizza during his studies in Munich in the "dramatic Academic Club" had met personally expressed understanding for tracking the blasphemous "bad taste" by the judiciary. In his criticism he was based on Panizza's published defense speech and, like many other critics, had probably not read the book himself.

Since conservative politicians suspected a political opposition, as it actually only developed around 15 years later, the Panizza case turned into a highly political trial against “ modernity ”. The public prosecutor therefore proceeded against Panizza with extraordinary severity. In the trial that took place on April 30, 1895 before the district court Munich I , Panizza took on the role of a champion for the freedom of modern literature and stylized himself as a martyr , consciously accepting the risks of such an attitude. Against the advice of his friends, who had previously advised him to flee abroad in vain, he fought against the state in his literary and art-historical defense. Defiantly, he also refused to deny that he had intended to publish the book published in Switzerland for Germany - the only chance of an acquittal.

With his speech on the basic values ​​of artistic freedom , he could hardly convince the twelve jury , to whose draw the judiciary had invited 28 citizens with consistently poor education. Panizza's admission “I declare that I am an atheist” had provoked a condemnation. One of the jurors said quite frankly: "When the dog would have been tried in Lower Bavaria, it didn't come alive!" Even the friend and sponsor Michael Georg Conrad , who was invited by Panizza as an expert , was stunned before the court in view of this behavior and could have doubts about the Panizzas hardly hide mental health.

So the trial inevitably resulted in a condemnation of Panizzas. No other writer in the Wilhelmine Empire was punished with comparable severity: unlike Frank Wedekind or Hanns von Gumppenberg , Panizza was sentenced not to brief imprisonment but to one year of solitary confinement and bore the costs of the proceedings and the prison stay.

In 1913 an edition of the Council of Love for the “Society of Munich Bibliophiles”, limited to 50 copies and printed in the Netherlands, was published and illustrated by Alfred Kubin . Due to strict censorship, each copy of this private edition had to bear the printed name of the future owner on the front page. The members of the society included Franz Blei , Karl Wolfskehl , Erich Mühsam and Will Vesper .

Kurt Tucholsky wrote in a short essay ( Panizza ) in 1919 that the work was a terrific drama. There are places in the play against which Wedekind looks like a good gazebo. It is true that it is a "real blasphemy" and one should spare the religious feelings of one's fellow citizens. But it would be presumptuous on the part of fellow citizens to demand, “We should feel at the same pace as they and live in the same rhythm as they do. Their laughter is not our laughter, and their pathos of melting is not ours. "

Even after the censorship was lifted, a theatrical performance of the love council was out of the question, as Panizza's family refused to release the copyrights for new editions of the incapacitated person - so for decades a real reception of the play was hardly possible. In the 1920s, bibliophiles paid top prices for copies of the confiscated first edition of the Love Council .

Even after the Second World War, Panizza's works were neither published nor performed for a long time and were not a topic of German studies. When Jes Petersen reissued a facsimile of the first edition of the Love Council in 1962 in a small edition of 400 copies, the book was put on the index and Petersen was imprisoned. His home was searched, books and pictures were confiscated and he was tried for distributing pornographic material. However, after violent protests from the press, all charges against Petersen were dropped. It was not until 1964 that Hans Prescher published the Love Council together with other publications at Luchterhand . For the first time, a basis for a broader reception of Panizzas in Germany was available. A French translation was published in 1960, a Dutch edition followed in 1964, an Italian edition in 1969 and an English edition in 1971.

The first performance of the Love Council as a play only took place in 1967, 74 years after its first publication, on the Vienna small stage Experiment and in 1969 it was brought to a large stage at the Théâtre de Paris under the direction of Jorge Lavelli . When the love council finally had its German premiere in 1973 at the Ernst-Deutsch-Theater in Hamburg , the expected outraged reaction of the public did not materialize, although the leading trade journal Theater heute dedicated the title report to Panizza.

A production at the Teatro Belli in Rome under the direction of Antonio Salines in 1981 caused a veritable scandal . The Italian production Il concilio d'amore was integrated into the film Liebeskonzil by German director Werner Schroeter , which premiered in the sold-out Zoo Palast at the 1982 Berlinale . The plot of the film is not completely identical to Panizza's play, so, like the Italian production, it lacks the most unbridled scene at the court of Alexander VI. in the Vatican. In contrast, the scenes are framed by the trial against Panizza, whose “evidence” is the theater production. The film could not meet the high expectations: Instead of the expected provocation, the film aroused rather disappointed boredom and was soon seen as a flop, the criticism of religion as a harmless anachronism from the Wilhelmine era. The low-budget production was also unsuccessful financially and only attracted a small number of viewers to the few cinemas in which the film was shown.

Since then, the Love Council has been staged regularly, but not often. Among other things, it was performed at the Berlin Schillertheater in 1988/89, directed by Franz Marijnen and with music by Konstantin Wecker . Most editions of the works and most of the literary studies of Panizza's work and life were published in the second half of the 1980s.

In May 1985, the Tyrolean provincial government banned the film as a complete surprise because it insulted the Christian religion. When the Otto Preminger Institute for Audiovisual Media Design (OPI) wanted to show the love council six evenings in their cinema in Innsbruck, the Catholic diocese filed a complaint against the director of the OPI, Dietmar Zingl, and found the support of the public prosecutor. Despite harsh reactions of the Austrian press, the film as a short time before was the specter of Herbert Achternbusch in Tirol prohibited. In 1994 the European Court of Human Rights ruled that the ban or confiscation of film reels did not violate freedom of expression (Article 10 of the European Convention on Human Rights). The film is no longer available in stores in Germany.

In Switzerland, a group called “Christians for Truth” filed a complaint against a staging of the love council by the senior class of the Bern Drama School in 1997, citing Section 261 of the Criminal Code ( disruption of freedom of religion and worship ) . This lawsuit was dismissed in 1998 by a court in Bern.

Clearly influenced by Panizza's work is the film comedy 3fold , directed by Harald Safeitz , in which Matthias Schweighöfer appears as Christ to the apocalypse on earth, but is changed by the Holy Spirit ( Christian Tramitz ).