Memorial plaque of the state of North Rhine-Westphalia. It should be attached to the monuments in a clearly visible manner.

→ Main article : History of the city of Dortmund 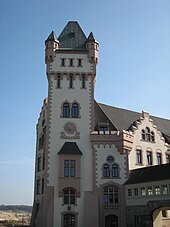 Traces of human settlement in Dortmund go back to the Neolithic Age . Documentary mentions begin in 775 with the conquest of Syburg by Charlemagne . Dortmund probably goes back to a Carolingian Reichshof foundation. The first mention of the place name dates to the time between 880 and 884; some of today's districts such as Aplerbeck, Brackel, Huckarde or Oespel are similarly old.

With the change of rule from the Carolingians to the Ottonians , Dortmund developed into the royal palace . With this, craftsmen and traders settled in Dortmund; Coin finds from the period between 983 and 1106 indicate early long-distance trading activities by Dortmund merchants. The Archbishop of Cologne, Friedrich von Schwarzenburg, destroyed the city in 1114; after the reconstruction, the Duke of Saxony Lothar von Supplinburg destroyed it again in 1115. A new Palatinate arose under Friedrich Barbarossa . Dortmund subsequently developed into an imperial city , while the surrounding area increasingly came under the influence of the Marks and, in some cases, Cologne .

The city's merchants joined the Hanseatic League . This developed into an alliance of cities whose Westphalian suburb was Dortmund. In 1232 a fire destroyed large parts of the city. In the following decades Dortmund experienced a first boom. It was not until the “Black Death” reached Dortmund in 1350 that there was a slight slump. The city's wealth continued to arouse the desires of the surrounding territorial rulers. In the Dortmund feud of 1388, the city was able to oppose a conquest by a coalition led by Brandenburg and Cologne, but had to go into debt. The city's prosperity continued, however, and found expression in numerous cultural achievements.

From the beginning to the middle of the 15th century there were repeated outbreaks of epidemics, which greatly decimated the population. In the course of the Soest feud , there was unrest and destruction in the city. With the beginning of overseas trade, a structural change began that led to the decline of the Hanseatic League and Dortmund. Dortmund was able to maintain imperial freedom and even received full control over the county of Dortmund .

In the 16th century there were confessional disputes, at the end of which the Lutheran denomination prevailed in Dortmund. The final decline of Dortmund to an agricultural town began with the Thirty Years' War , the town was conquered in 1632 after several unsuccessful sieges. During the occupation there was frequent looting and the paralysis of economic life, epidemics reduced the population to a third.

It was not until the end of the 18th century that Dortmund's special position as an imperial city in what was now Prussian territory led to a slight rise in Dortmund, but after the Reichsdeputationshauptschluss Dortmund also became Prussian. Coal mining and steel processing initiated industrialization in Dortmund in the middle of the 19th century . The population increased rapidly: converted to today's urban area, the population rose from 31,211 in 1843 to 379,950 in 1905. The industrial age changed the appearance of the cities and communities permanently, between 1905 and 1929 the surrounding towns were incorporated into Dortmund and the city received its current size.

During the Second World War , Dortmund, as an industrial location, was the target of British air raids ; in a total of eight major attacks between 1943 and 1945, around 95% of the building fabric in the city center was destroyed. After the war there were considerations to rebuild the city elsewhere, but the reconstruction took place more quickly. The town planning aimed to create sufficient living space and to promote the reconstruction, later it was based on the ideal of the car-friendly city .

A structural change began in the 1950s and continues to this day. The associated de-industrialization lost around 90,000 jobs; the last mine closed in 1987. During the Emscher Park International Building Exhibition from 1989 to 1999, former industrial facilities were converted into cultural monuments. These industrial monuments are accessible today via the route of industrial culture, in Dortmund for example via the theme route 6 - Dortmund: triad coal, steel and beer . In 2010, Dortmund was part of the RUHR.2010 - European Capital of Culture under the motto "Change through culture - culture through change".

Information sign at the Catholic parish church of St. Josef Kirchlinde with information on the building history and furnishings. Such information boards can be found on some of Dortmund's architectural monuments.

The lower monument authority has to keep a list of monuments. In Dortmund, this is subdivided into the districts of Aplerbeck , Brackel , Eving , Hombruch , Hörde , Huckarde , North , East and West , Lütgendortmund , Mengede and Scharnhorst . The list of monuments is essentially based on the list of the North Rhine-Westphalian Minister of Education and Cultural Affairs from 1979. After the passing of the Monument Protection Act of North Rhine-Westphalia, the City Council of Dortmund drew up a first list of monuments on June 30, 1983, which was supplemented and added several times in the following years was changed.

The entry of cultural monuments in these lists takes place in consultation with the Landschaftsverband Westfalen-Lippe (LWL), which also offers expert advice from the LWL monument preservation, landscape and building culture in Westphalia and the LWL archeology for Westphalia . Since March 29, 1984, the Dortmund City Council has been deciding on changes to the list of monuments. Exceptions to this are monuments owned by the State of North Rhine-Westphalia and the Federal Republic of Germany, the registration of which is decided by the Arnsberg District Government.

Lists of architectural monuments in Dortmund

Ground monuments are "movable or immovable monuments that are or were in the ground". The list of monuments of the city of Dortmund includes 21 archaeological monuments, including ten former fortifications / castles or aristocratic residences, five sites with a history of mining as well as two traces of prehistoric settlement and two former sacred buildings. Of the total of 21 soil monuments, five are in the Hörde district, four in Aplerbeck, three each in Huckarde and three in the west of the city center, two each in Mengede and Scharnhorst and one each in Brackel and Hombruch. In the city districts of Eving>, Innenstadt-Nord, -Ost and Lütgendortmund there are no soil monuments registered.

Monument areas are “majorities of structures” that do not have to be individual monuments. In Dortmund, the Oberdorstfeld settlement forms such a monument area. A total of 72 of the 510 buildings within the settlement are again architectural monuments.