The DuMont media group , based in Cologne, is one of the largest and oldest German media companies. Today it is run by the 12th generation. 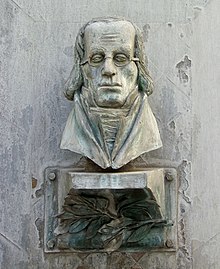 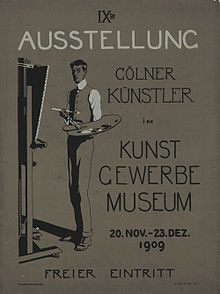 Poster by M. DuMont Schauberg from the year 1909 after August LM Neven Du Mont for the "9th exhibition of Cologne artists in the Kunst-Gewerbe-Museum "

Cologne emergency money from 1921 with Adenauer's signature and the imprint “M. Dumont Schauberg, Cologne “
10 Pfennig and back

The roots of the DuMont media group go back to the beginning of the 17th century: The Hilden'schen Buchdruckerei zu Cologne, founded in 1626 by Bertram Hilden , continued by his son Peter Hilden († 1683), was merged with Gereon Arnold Schauberg's printer in 1735 . The later Kölnische Zeitung was printed by Schauberg and his heirs. Today's group of companies came into being in June 1802 with the acquisition of the Kölnische Zeitung by the Schauberg heirs.

On June 10, 1805, the printing works was bought for 1,400 Reichstaler by Marcus DuMont , who married Maria Katharina Jacobina Schauberg (1779–1845) in the same year. He also took over the rights to the Kölnische Zeitung with a circulation of only 250 copies.

During the French occupation, the sale of the Kölnische Zeitung was banned in 1809 . After intervening with Emperor Napoléon, the publisher received compensation payments of 4000 francs and was allowed to print the Mercure de la Roër as well as an advertising paper. The day after the end of the French occupation in Cologne, the Kölnische Zeitung appeared on Sunday, January 16, 1814 , with M. DuMont as editor again.

With Johann PGW Bachem , who was returning from the war , he founded the DuMont-Bachem'sche Buchhandlung in 1815 , which took over the publishing division for books as well as product ranges (periodicals) from DuMont and published its first book in 1816. M. DuMont's printing works and the Kölnische Zeitung were not transferred to the company's assets. In 1816, Bachem and his brother Lambert Bachem opened a lending library, where the brother worked and the young August Reichensperger was a frequent customer.

Marcus DuMont died in 1831. His twenty-year-old son Joseph DuMont took over the bookstore, the newspaper and the editorial department and, with his mother, managed the distribution of the publishing house, product ranges (now called: periodicals ) and newspapers until 1844. After the turn of the year, on January 1, 1845 responsibilities became the joint property of the brothers Joseph and Michel DuMont. In 1847 they split the lines of business. Joseph then managed the newspaper and the M. DuMont Schauberg printing company , while Michel took over the publishing house and the bookstore.

Joseph DuMont died in 1861 and in 1862 his heirs took over the printing and newspaper business.

Until 1864/65 the name of the family, which until then was written in two words Du Mont in documents and also in the publisher's names , was summarized in one word with a capital M DuMont .

In 1866, the Kölnische Zeitung had expanded from a weekly to a daily national newspaper, so that a weekly edition on Fridays with a summary of the events of the previous days was developed for interested parties who lived far away and for weekend business. For the Franco-Prussian War (1870–1871) the publisher published a field newspaper.

August Schmits took over the post of editor-in-chief of the newspaper in 1872.

The Kölner Stadt-Anzeiger appeared in November 1876 as a regional supplement and advertising paper to the supraregional Kölnische Zeitung and in competition with the Generalanzeiger of the City of Cologne , which was published a year earlier by Joseph La Ruelle in Cologne, but was discontinued soon after the Kölner Stadtanzeiger was published. In 1879 the publishing house introduced the weather news service as an additional reader service in the German press.

When Ludwig DuMont and shortly after Ferdinand Wilhelm Schulze died in 1880, August Neven (-DuMont) took over the publishing house M. DuMont Schauberg in addition to his duties in his father's business . That year he brought his son Josef and in 1892 his son Alfred into the publishing house.

It was not until 1882 that Neven and his family were given permission by a royal Prussian name association to use his wife's maiden name as a double name, Neven DuMont, in addition to his maiden name . In the same year August Neven DuMont founded the Strasbourg Post at the suggestion of the Reich government to support the integration of the population of Alsace-Lorraine into the Reich. The last edition was published on November 11, 1918.

When August Neven DuMont died in 1896, his sons Alfred Neven DuMont and Josef Neven DuMont took over the management of the M. DuMont Schauberg publishing house as full partners.

In the Weimar Republic , the city of Cologne had M. DuMont Schauberger print part of the emergency money from 1923 . The Kölnische Illustrierte Zeitung appeared for the first time in 1926 .

The role and entanglements of the publishing house during the Nazi era , especially that of co-owner Kurt Neven DuMont, was repeatedly the subject of controversy. In the article “Klüngeln im Krieg” in the magazine Der Spiegel on February 13, 2006, the publisher and family were accused, among other things, of profiting from the expropriations of Jewish neighbors and of having profited from “ Aryanized ” Jewish properties. The article was essentially based on research by the Cologne-based author Ingo Niebel, who later admitted that he had overlooked key information when “leafing through” a reimbursement file too quickly. After Niebel had submitted an affidavit, the magazine Der Spiegel was sentenced by the Cologne Regional Court on the basis of a complaint by the publishing house, under threat of a fine of up to 250,000 euros or up to six months of custody for each case of infringement.

Kurt Neven DuMont's membership of the NSDAP was largely unknown until the research by Spiegel and Ingo Niebels. Due to the allegations, the house had its own history worked through with the collaboration of the company historian Manfred Pohl . This commissioned work was seen by some critics as "relativizing".

Another accusation was that the publishing house owners had worked closely with the NSDAP, both before 1933, when they had campaigned for the bourgeoisie to unite with Hitler, and during the war: “The Kölnische was one of the few newspapers that had the propaganda department of the Considered the Wehrmacht to be so loyal to the line that they sent them to the soldiers at the front. ”In contrast to other newspapers in the German Reich, the Kölnische Zeitung and the Stadtanzeiger could appear until shortly before the Allied invasion.

After the Second World War , after its reappearance in October 1949, the Stadt-Anzeiger emerged as the leading Cologne newspaper from a tough competitive battle with the Kölnische Rundschau , which was founded in 1946 and is affiliated with the CDU .

In February 1964 the tabloid Express came on the market, which was able to break the monopoly of Bild in the region.

In April 1998 the publishing house moved from the previous “Pressehaus” at Breite Strasse 70-72 to Amsterdamer Strasse 192, where a new building costing 160 million DM was available. Between 1999 and 2001 the publishing house was one of the participants in the so-called Cologne newspaper war and from 2000 publisher of the free daily newspaper Kölner Morgen , which appeared with a circulation of 100,000 copies. At the same time, the publisher first sued the Cologne Higher Regional Court against its competitor Schibsted Publishing Group and finally lost the case before the Federal Court of Justice (BGH).

On July 6, 2005, the Düsseldorf Higher Regional Court lifted a veto by the Federal Cartel Office . DuMont Schauberg was then allowed to take over higher shares (2012: 18%) in the publishing house of the Bonner General-Anzeiger .

In 2006, 50 percent of the shares and one vote in Frankfurter Rundschau were taken over by the media holding company Deutsche Druck- und Verlagsgesellschaft der SPD, as well as all shares in the Bundesanzeiger Verlag. On August 13, 2006, 25 percent of the Israeli Haaretz Group was bought in the form of a direct investment of 25 million euros. On January 13, 2009 the publisher announced that it would take over the activities of the Mecom Group in Germany. These included the Berliner Verlag with the Berliner Zeitung and the Hamburger Morgenpost . According to its own information, Mecom achieved a sales price of 152 million euros for all of its publications. In August 2009, the German Association of Journalists warned against further merging of departments and the exchange of articles at Berliner Zeitung, Frankfurter Rundschau and other newspapers of the publisher due to the quality of the press. He recalled the promise made by Alfred Neven DuMont on the occasion of the takeover of the Berlin publishing house to protect the independence and sovereignty of the individual titles.

“A newspaper must always be made from a single source on site. […] Against the will of an editorial office, you might get (a large headquarters) enforced, but the damage to the corridor will be huge. "

From October 2014, the publisher tried to produce a daily newspaper for young people between 19 and 39 years old, called XTRA , which was not accepted by the target group as hoped and was therefore discontinued in March 2015.

With the takeover of several newspapers, Alfred Neven DuMont pursued the goal of expanding the DuMont Group into a publishing house of not only regional but national importance and achieved a monopoly position in the Rhineland. The takeover of newspapers outside the region, for example in Frankfurt, Berlin or Hamburg, were bad investments that led to large losses. DuMont focused on printed press products and ignored the trend towards digital media. As a result, the company's equity ratio fell to ten percent according to the annual financial statements for 2014.

The DuMont newspaper group therefore has economic problems in all areas of the group. After taking over the Berliner Tageszeitung, the Berliner Kurier and the Hamburger Morgenpost, the company lost an estimated three-digit million figure and cut 50 out of 190 jobs in Berlin and carried out more job cuts and cost-cutting measures. In Cologne, the company merged the editorial offices of the Express and the Stadtanzeiger in 2017 in order to save 18 jobs.

On September 4, 2018, the Federal Cartel Office imposed a fine totaling 16 million euros on DuMont Mediengruppe GmbH & Co. KG, a responsible person and a lawyer. DuMont was accused of having made a prohibited territorial agreement with the Bonner General-Anzeiger group . The territorial agreement, which ran until 2016, was further secured by the companies in 2005 through mutual holdings and the granting of a right of first refusal to the Bonner General-Anzeiger group by the DuMont Group. The right of first refusal was deliberately withheld from the Federal Cartel Office, although it was of crucial importance for the merger control assessment of the mutual interests. The DuMont Group and the persons involved have conceded the allegations made against them and agreed to an amicable end of the proceedings.

In February 2019, the media magazine Horizont reported that the DuMont media group would offer its newspapers for sale. Two days later, the shareholders confirmed the sales plans. The Berliner Verlag was sold to the entrepreneur couple Silke and Holger Friedrich in September 2019 , the Mitteldeutsche Zeitung in January 2020 to the Bauer Media Group and the Hamburger Morgenpost in February 2020 to the entrepreneur Arist von Harpe. According to a decision made in December 2019, the Kölner Stadt-Anzeiger and the Express remained with the DuMont media group.

In December 2016, DuMont acquired 75 percent of Facelift , one of the leading providers of social media marketing software in Europe. DuMont described the investment as an important step in the expansion of the media group's digital business. In June 2018, DuMont took over DTAD Deutscher Dienstsdienst AG. With around 100 employees, the Berlin company is a leading service for public and commercial order data and especially public tenders in Germany, Austria and Switzerland. As part of its digitization strategy, DuMont Business Information is creating a new offer in the field of public and private contract information for decision-makers from business and the public sector. DTAD AG publishes over 600,000 tenders and construction projects every year and operates a database for companies and public procurement agencies.