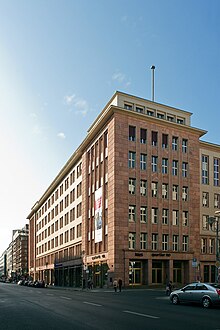 The Hertie School in Berlin's Friedrichstrasse

Reading room with a library behind

The Hertie School (until August 2019 Hertie School of Governance ) is a state-recognized, private university with the right to award doctorates in Berlin . It was founded in December 2003 by the non-profit Hertie Foundation as a non-profit GmbH and has been located in the Quartier 110 building in Berlin's Friedrichstrasse since September 4, 2008 . Leading English-speaking professional schools, especially the Harvard Kennedy School and the London School of Economics, served as role models .

Two master’s courses are offered: the Master of Public Policy (MPP) and a Master of International Affairs (MIA). Experienced professionals are also offered an Executive Master of Public Administration (Executive MPA) degree as well as individual advanced training seminars and workshops. The language of instruction is English.

The Master of Public Policy (MPP) degree can be obtained after completing a two-year Master’s course. This can be completed consecutively after completing a bachelor's degree as well as postgraduate. “Good governance in the 21st century” is the main focus, but it is not limited to the classic government offices. Microeconomics, macroeconomics and negotiation are just as much a part of the curriculum as political management and the development of modern forms of governance. Practical knowledge should be acquired in case studies, in an eight-week internship and in the thesis in the second year of study.

The two-year Master of International Affairs (MIA) course has been offered since September 2015. It imparts specialist knowledge in the field of international relations and prepares you for the special challenges of modern governance in a globally networked world.

The Executive Master of Public Administration program is aimed at experienced professionals for whom cooperation between the state, business and civil society is part of their work. Every student in the EMPA program chooses one of three individual focus areas. These are Management and Leadership, Economics, Finances and Methods or Intersectoral Management. The master’s degree can either be completed full-time over a year or part-time over two years.

Since September 2008 the Berlin Graduate School for Transnational Studies (BTS) has been running a doctoral program , a joint project of the Hertie School with the Free University of Berlin and the Berlin Science Center for Social Research .

From September 2012, the Hertie School will offer its own, three-year, structured doctoral program in Public Policy, which can be awarded either as a PhD in Governance or Dr. rer. pole. leads.

Board of Trustees and Supervisory Board

The educational institution has institutional partnerships and a. with Sciences Po in Paris, the London School of Economics and Political Science , Columbia University in New York and the Luigi Bocconi University of Economics in Milan, which enable stays abroad of one or two semesters in the second year of the MPP. In addition, some students have the opportunity to obtain a dual degree at one of the partner institutions. Since 2011 there has been a cooperation with the ESCP Europe Business School Berlin. The cooperation includes an exchange program for part-time management courses for managers from both universities. Since the beginning of 2011, participants in the “European Executive MBA Program” of ESCP Europe and the “Executive Master of Public Administration” of the Hertie School have been able to take part in individual elective courses at the other partner university. The achievements and credits acquired are mutually recognized. A similar exchange program exists with the Copenhagen Business School and the University of Bern .

After completion of the renovation of the Robert Koch Forum , which began in 2019 , the university is to move to the listed building in summer 2022.