This article is about the architect Johannes Vollmer. For the transmission technology engineer, see Johannes Volmer 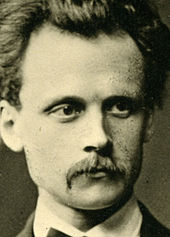 Johannes Vollmer (born January 30, 1845 in Hamburg ; † May 8, 1920 in Lübeck ) was a German architect and university professor who became known throughout Germany primarily for his Protestant church buildings.

Johannes Vollmer was born as the second child of the Hamburg marine painter and graphic artist Adolph Friedrich Vollmer (1806–1875) and his wife Auguste Amale Behrmann (1815–1855). At the age of ten he lost his mother; Julie de la Camp (1829-1896) became his stepmother and his four siblings.

After an apprenticeship as a bricklayer in Hamburg, Vollmer studied at the Technical University of Hanover, in particular, medieval designs under Conrad Wilhelm Hase (1818–1902), the founder of the Hanover School of Architecture , which was characterized by a turn to neo-Gothic . In 1874, Vollmer followed Johannes Otzen , whom he met in Hanover, to Berlin. He became his assistant for the subject of brick construction at the Technische Hochschule Charlottenburg and after his resignation in 1885 his successor. As an employee in Otzen's architectural office until the end of the 1870s, Vollmer carried out his first independent building with the Reformed Church in Bremen-Blumenthal . This was followed by numerous church buildings in Germany and Switzerland, as well as the Berlin train stations Friedrichstrasse and Hackescher Markt (originally called the stock exchange ). At the center of his activity, however, remained the Protestant church building, of which he was one of the main representatives in Berlin alongside Otzen and Max Spitta . The Kaiser-Friedrich-Gedächtniskirche ( Kaiser-Friedrich-Gedächtniskirche) at Berlin's Tiergarten , built between 1892 and 1895, also fell into this creative phase and was praised as “probably his most successful work”.

In 1896 Vollmer joined forces with his assistant at the Technical University, Heinrich Jassoy , to form the Vollmer & Jassoy architects' association , after they had both built the chapel on the Luisenfriedhof together in 1891/1892. During the nine-year period of their collaboration, the Trinity Church in Berlin-Charlottenburg, the Kurhaus in Westerland ( Sylt ) and the building ensemble of the Christ Church with the adjoining district building in Koblenz fall . In 1899 they both received a small gold medal at the Great Berlin Art Exhibition . The partnership was dissolved in December 1904 after Jassoy had received an appointment as professor at the Technical University of Stuttgart. Vollmer moved to Lübeck in 1905, but continued to take part in competitions and built the Holy Spirit Church in Rostock.

In 1874 Johannes Vollmer married Clara Elisabeth Duncker (1849–1943), granddaughter of the Hamburg businessman Johann Wilhelm Duncker senior. and maternal granddaughter of the doctor and political publicist Johann Georg Kerner . Among their four children are Hans Vollmer , art historian and long-time editor and editor of the standard artist encyclopedias “ Thieme-Becker ” and “Vollmer” , as well as the painter and sculptor Erwin Vollmer .

The Eisenach regulation of 1861 called for the connection to medieval building forms for the design of Protestant church buildings in Germany. In the context of these regulations, Vollmer preferred the strict forms of the "early Gothic" (Bremen-Blumenthal, Trinitatis) in his brick buildings, which preserve the principle of simplicity of the Protestant churches. The Heilbronn Church of Peace is characterized by a "transitional style" with Romanized wheel windows and elongated Gothicized arched windows. After overcoming the regulation through the Wiesbaden program , Vollmer's built-in houses at the turn of the century tied in with forms of secular architecture from the German Renaissance of the 16th century, for example the churches in Zurich and Grottau in its early phase, the Luther Church in Bonn in the “developed phase “Of the German High Renaissance, while the Luther Church in Cologne is based on its late phase, which tended towards the Baroque.

Chronological overview of the completed buildings.