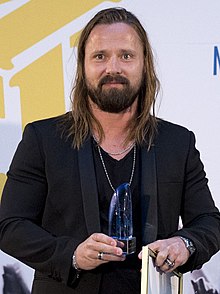 Max Martin (born Karl Martin Sandberg on February 26, 1971 in Stockholm ) is a Swedish music producer and songwriter . His hits for Britney Spears , Backstreet Boys , * NSYNC , Rednex , Pink , Katy Perry , Celine Dion , Bon Jovi and Taylor Swift have made him one of the most commercially successful songwriters since the late 1990s.

After his first attempts as a singer named Martin White in the Swedish funk metal band It’s Alive , Sandberg turned to pop music . The Swedish producer and founder of Stockholm's Cheiron Studios, Denniz PoP , offered the band a record deal in the early 1990s. Sandberg then learned composition and production of pop music from Denniz PoP and on his advice adopted the artist name Max Martin .

In 1995 Martin produced the successful Rednex song Wish You Were Here together with Denniz PoP . In the same year some songs for the ace-of-base album The Bridge followed . In 1996 Martin and PoP worked as a production team for the Backstreet Boys . Together they wrote and produced a large part of the songs on the band's debut album with other members of the Cheiron studio. While PoP's typical dance-oriented style some of the songs such as B. We've Got It Goin 'On dominated, the later typical "Max Martin sound" appeared on the album for the first time, especially in the title Quit Playing Games with My Heart , which took top positions in the charts in numerous countries and at the same time it was the first title that helped the Backstreet Boys break through in the USA. Martin also produced the second album of the Backstreet Boys. Martin also worked on albums for * NSYNC (including the debut single I Want You Back ) and 5ive . In 1998, after the sudden death of Denniz PoP, he took over the management of the Cheiron studios and produced the debut album by Britney Spears . The first single … Baby One More Time, produced by him and his new production partner Rami Yacoub, and the album of the same name simultaneously entered the US charts at number 1 at the end of 1998, making Spears the youngest artist ever to succeed.

In addition to Spears' second platinum album Oops!… I Did It Again , Martin wrote and produced for various music stars in the late 1990s, including N'Sync ( It's Gonna Be Me ), Celine Dion ( That's The Way It Is ), Bon Jovi ( It's My Life ), Bryan Adams ( Cloud # 9 ), Westlife ( When You're Looking Like That ), and the Backstreet Boys' third album ( Millennium ), which was released in 1999. Of the twelve titles, seven were written by Martin, four of which were released as a single. The first single, I Want It That Way , became the most played song of 1999, and the album itself became the best-selling album of the year. Max Martin received the ASCAP (American Society of Composers, Authors and Producers) Songwriter of the Year Award in 1999, 2000 and 2001 .

The end at Cheiron

At the end of 2000, however, when the next Backstreet Boys album Black & Blue had just been released, Max Martin decided to close the Cheiron studios. As a reason he later stated in an interview in Time magazine that he had taken this step mainly because the work would not have been the same without the former founder Denniz PoP. The success of the last few years also meant that the fun, which Cheiron was always in the foreground, was threatened with disappearing. The producers, who had their musical home at Cheiron, went their own way from then on.

Martin opened the new production company Maratone in Stockholm with Rami and his previous Cheiron business partner Tom Talomaa, but was much less present afterwards. After a few more songs for Britney Spears ( Overprotected ), Celine Dion and Nick Carter's solo album, things got rather quiet around him.

From pop to rock

With the temporary end of the teen pop era after 2001 and the greater demand for other music styles, Max Martin turned around and returned more and more to his rock music roots. First attempts in the genre were songs for Lambretta ( Bimbo ). He also participated in 2002 in the writing of the songs for the album X by Def Leppard ( Unbelievable ).

In addition to working with Rami, he also worked with Lukasz Dr. Luke Gottwald, guitarist on the well-known US comedy show Saturday Night Live . An immediately successful project of this collaboration were the songs Since U Been Gone and Behind These Hazel Eyes produced for Kelly Clarkson . Martin also produced rock songs for the Backstreet Boys' comeback album released in 2005, including Just Want You to Know and I Still… . Recent productions are songs for Ana Johnsson , The Veronicas and Pink.

Martin also wrote songs for Simple Plan , James Blunt and Avril Lavigne , the Sugababes, and with Dr. Luke and Cathy Dennis wrote the single I Kissed a Girl by Katy Perry , which reached number 1 in the charts in the USA, Great Britain and Germany. Pink's single So What , which was No. 1 in Germany in the first week, also came from him. Later, with Katy Perry's Hot n Cold, another Martin production topped the German charts. With three No. 1 hits within four months, Martin was just as successful commercially as he was in the Cheiron days in the late 1990s. In 2008 he was at the top of the German charts for a total of 12 weeks, making him the most successful musician of the year in the charts. For Circus , Britney Spears ' album , he produced the track If U Seek Amy , according to the official Cheiron Studios website .

Since 2009 he has produced the US No. 1 hits Raise Your Glass by Pink, Last Friday Night (TGIF) , ET , Teenage Dream and California Gurls by Katy Perry , My Life Would Suck Without You by Kelly Clarkson , 3 by Britney Spears and Shake it off , and Blank Space by Taylor Swift . Since 2010, he has also written nine US top ten hits, including Dynamite by Taio Cruz , DJ Got Us Fallin 'in Love by Usher , Whataya Want from Me by Adam Lambert, Raise Your Glass and Fuckin' Perfect by Pink , What the Hell by Avril Lavigne , Hold It Against Me , Till the World Ends and I Wanna Go by Britney Spears , I Knew You Were Trouble by Taylor Swift and Love Me like You Do by Ellie Goulding .

The “Max-Martin-Sound” is characterized above all by classic verse / refrain song structures, whereby the refrains are always emphasized and their mostly eight-bar memorable form lead to a catchy tune effect. The refrain usually also forms the hookline of the song, but there are often other hooklines in the most varied of forms, so that the songs are quickly recognized even by uninterested listeners. Modulations of the last chorus repetitions in a higher key as well as overlapping choruses in which several vocal parts merge are also typical . In general, the vocals are in the foreground, the background consists mainly of synthetic sounds, often enriched with guitars and always with a strong, very haunting rhythmic beat .