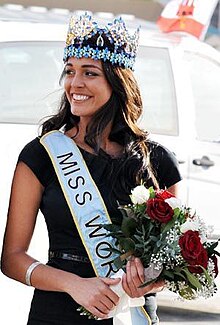 Miss Gibraltar is a beauty pageant in the British overseas territory of Gibraltar that has been held since 1959. Participants must be born in Gibraltar or have British citizenship and have been resident on the peninsula for at least 5 years.

The first event was organized by the Vox newspaper in 1959 . The winner was married, but that didn't contradict the conditions of participation at the time. Only when the competition was revived in 1964 by the television company GBC Television did the candidates have to be single and childless. Today's organizer is the Gibraltar Tourist Office . The winners take part in the Miss World election. In 2009, Kaiane Aldorino was the first Miss Gibraltar to win this title.