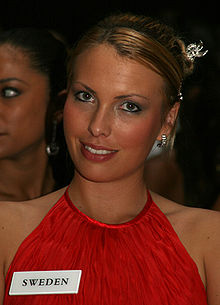 Miss Sweden is a national beauty pageant for unmarried women in Sweden . It has been held annually since 1949. The winners are also called Fröken Sverige domestically .

Before the Second World War , a few Swedish candidates took part in Miss Europe : Birgit Engquist in 1936 and Karin Ring in 1938.

Sponsors and organizers from 1949 to 1999 were the magazine Vecko-Revyn , from 2000 the TV station TV3 , and in 2004 the men's magazine Moore Magazine . In 2005 the competition was canceled. The reason given was “disability by feminist groups”. Therefore, the new organizer - the swimwear manufacturer Panos Emporios  - revised the concept in order to revive the event in 2006 as Nya Fröken Sverige .

Since 2007 there has been an independent competition for Miss Earth Sweden . Roberto Strindstedt is the managing director of the agency of the same name .

In 2009 a separate competition for Miss Universe Sweden was established, carried out by Starworld Entertainment Corporation with managing director Joakim Granberg .