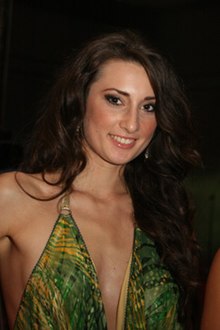 Miss Romania is an annual national beauty pageant for unmarried women in Romania that began in the 1920s. The first beauty queen has even been handed down from 1906: Maria Peligrad from Sibiu (Hermannstadt) in Transylvania . At that time, however, the part of the country belonged to Austria-Hungary .

The winners took part in the Miss Europe and Miss Universe elections.

After decades of interruption due to the Second World War and the rule of communism , the event was held once again in 1979 and revived in 1991. It has been a registered trademark at the National Patent Office OSIM since 1993 under the name Miss Romania . The trademark owner and president of the organization is Gavrila Inoan .

Another organization has chosen the Romanian participant for the Miss World elections since 2001 (?) : Miss World Romania .

A special competition for women of Romanian origin who live abroad is Miss Diaspora . It is organized by the Pro Familia Association in Bucharest as part of the Callatis Festival , the largest music and culture festival in the country. (The model for this competition was the Italian for Miss Italia nel Mondo ).