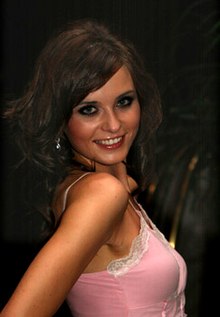 Miss Poland is a national beauty pageant for unmarried women in Poland called Miss Polonia there . It was first carried out in 1929 by the magazines Ekspres Poranny and Kurier Czerwony to determine a participant for the newly created Miss Europe competition .

Miss Polonia was not elected every year, however, most recently in 1937 before the Second World War . The war and the subsequent Stalinism caused a long break in the competition . The countries of the socialist camp unwillingly rejected beauty competitions for ideological reasons and did not take part in international competitions. The more liberal Yugoslavia was an exception . In Poland, during a phase of the “political thaw” in 1957/58, there were again temporary bizarre elections, the winners of which even ran internationally. Annual competitions have only been held again since 1983. They are organized by the Biuro Miss Polonia . Finalists take part in the international elections for Miss Universe , Miss International , Miss Europe , Miss Earth and Miss Baltic Sea .

A competition under the title Miss Polski was launched in 1990 by the Missland Society (founded in 1989 in Warsaw). Your winners will run for Miss World .