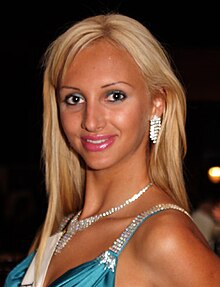 Paolina Racheva, Miss Bulgaria World 2007, as a candidate for Miss World 2007 in China.

Miss Bulgaria is a national beauty pageant for unmarried women in Bulgaria , which is called Miss Bulgarija (Мис България) domestically . It was carried out as early as the 1920s and 1930s. From this time, however, only the last names of a few winners are known who took part in the Miss Europe election .

After a long hiatus due to World War II and communist rule, the competition has been back since 1990.

Note on the spelling of the names: The Bulgarian is the original form - except for the names of the victors before the war, which were only available in Latin script. Everyone else was