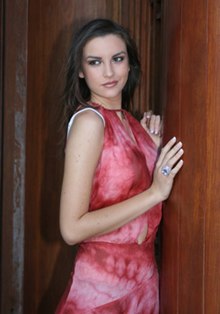 Miss Italy is a national beauty pageant for unmarried women in Italy , domestically called Miss Italia . It has been carried out under this name since 1946.

There were two forerunners: One began as early as the 1920s. The name is not known. The winners were already taking part in Miss Europe and Miss Universe . The second competition was founded in 1939 to increase awareness and sales of a toothpaste brand. It was called 5000 lire per un sorriso (5000 lire for a smile). The two most important parts of the competition were already named: the prize and the requirements for the candidates.

After an interruption due to the Second World War , the competition was revived under its current name.

Some of the participants later became known as film actresses, including the third from 1947, Gina Lollobrigida , also Silvana Mangano , Eleonora Rossi Drago , who were also candidates in 1947, and Maria Grazia Cucinotta , who also took third place in 1987. In 1996, the future Bond girl Caterina Murino took fourth place.

A competition for Italian women living abroad was held from 1991 to 2012 under the title Miss Italia nel Mondo (Miss Italy in the World).

The Miss Universo Italia competition to determine the Italian Miss Universe candidate has existed since 2003 . The organizer is Tradeco Entertainment Srl in Russi (Emilia-Romagna) .

A separate competition to determine the Italian participant in Miss World has existed since 2005 under the name Miss Mondo Italia (Miss Welt / World Italy). The organizer is the mediagroup www.missmondo.it based in Leverano (province of Lecce).