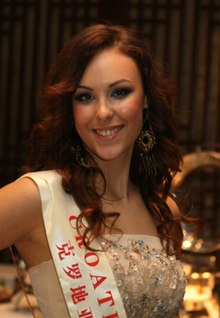 Ivana Ergić, Miss Croatia 2006, performing live in the "THE BEST" disco in Zagreb

Miss Croatia is a national beauty pageant for unmarried women in Croatia , which is called Miss Hrvatske domestically . It has been carried out since 1992. The organizer is Milan Šećković in cooperation with the television station Nova TV . The winners take part in the Miss World election.