The Roman Catholic parish church of St. Laurentius (also Laurentiuskirche ) in Dittwar , a district of Tauberbischofsheim in the Main-Tauber district in Baden-Württemberg , was built as a Baroque church from 1753 to 1755 and is consecrated to St. Lawrence of Rome .

Christianity found its way into Dittwar in the time after St. Boniface , when he founded the diocese of Würzburg and inaugurated a church in the neighboring Tauberbischofsheim in 722. A short time later (around 725 to 735) he built a monastery there for his relative Lioba. Dittwar was first mentioned in a document around the year 1100 and it is assumed that the place was settled as an expansion site before the year 900. The Dittwar community therefore belonged initially to the diocese of Würzburg and from around the year 900 to the archdiocese of Mainz , because this affiliation is documented for the neighboring community of Tauberbischofsheim and the same may also apply to Dittwar.

In 1222 an independent parish with its own church was named in Dittwar . In 1232 a people priest was mentioned.

The time as a branch church

Despite existing parish priests under Mainz patronage , Dittwar was pastored by the Martinskirche in Königheim until 1618 , then by the town church of St. Martin from Tauberbischofsheim.

Origin of the pilgrimage to Kreuzhölzle

A deaf and dumb girl from Dittwar found two figures depicting Mary and John in an oak tree while collecting wood. As a result, a small altar was initially erected at the site. A pilgrimage to Kreuzhölzle has been documented since 1670 . In 1683 a cruciform chapel (also known as Kreuzhölzle ) was inaugurated at the site .

Reconstruction of the parish and new building of today's church

In 1702 a new parish was established in Dittwar. On April 28, 1746, the Vicar of Mainz declared the Deeimatoren zu Dittwar guilty of building a pr rate choir . In 1747 the parish received permission to print the first pilgrimage booklet on Kreuzhölzle from an episcopal commission. After the old church became dilapidated, the current church was rebuilt between 1753 and 1755. It is already the fourth recorded church in Dittwar; the first two were made of wood, the last two were stone buildings. A few years later, in 1759, the parish also built a way of the cross to Kreuzhölzle, which was inaugurated by the Tauberbischofsheim Franciscans .

It is recorded from 1899 that there was an incident in Dittwar during the service because the Hof-Steinbachers had been attending Sunday services in the Laurentius Church for a long time, although they belong to the parish of St. Vitus in Dittigheim .

In the period after the First World War , the Laurentiuskirche received new church bells . Of these, a bell from 1925 is still preserved today. After the Second World War , two more bells followed, which were cast in 1950 and have since formed a three-part ring.

The Laurentiuskirche is a stately plastered building with corner blocks and a curved volute gable. Instead of a tower, it has a roof turret above the main entrance. 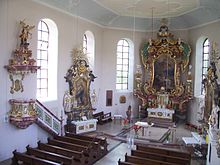 Interior of the Church of St. Laurentius in Dittwar
with baroque portals and ornate wayside shrines

The Laurentiuskirche in Dittwar has, among other things, several baroque portals and richly decorated wayside shrines . A Gothic sacrament niche from around 1500 made of red sandstone is set in the choir . Much of the equipment consists of decorative baroque. The former ceiling paintings were painted over.

A virtuoso high altar composition complements the furnishings. The image of the baroque high altar depicts the martyrdom of St. Lawrence. The nave of the church consists of a room with a three-sided choir and sloping side altars. 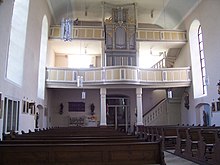 Gallery of St. Laurentius in Dittwar
with organ by Wilhelm Schwarz & Sohn

The Laurentiuskirche has an organ by Wilhelm Schwarz & Sohn from 1905. The instrument has 17  stops on two manual works and a pedal .

A three-part bell hangs in the tower. The bells 1 and 2 are from the year 1950 by the bell foundry of the brothers Rincker in mind . Bell 3 was cast in 1925 by the bell caster Störmer in Erfurt . The Te Deum motif sounds in the melody line . The bells are located in the middle above the entrance gable of the parish church. They hang in an old wooden bell chair in a so-called post chair construction.

In the granary of the church there is an old mechanical clockwork . The church tower is covered on one side with a dial . Bells 1 and 2 are integrated into the chime: Bell 2 strikes the quarter-hour and bell 1 strikes the hour.

The Laurentiuskirche is located at Laurentiusstraße 6 and is a cultural monument of the city of Tauberbischofsheim. It is under monument protection as another monument .

The following pastors and pastors have been active since the reconstruction of the Dittwar parish in 1702:

The parish of St. Laurentius maintains the Catholic Youth Club (KJC) Carawanse Dittwar as a sponsor for church youth work. This was founded on October 25, 1979. The Carawanse maintains an open youth center below the kindergarten for the care of young people. Your work is politically independent, neutral and non-denominational.

Roman Catholic churches, chapels and monasteries in the city of Tauberbischofsheim