The former logo consisted of a stylized coral . This metaphorically alluded to the property of a coral that it can only thrive in moving water and then develop large and beautiful colonies. When these die from the inside and calcify, they give the reef the strength it needs to be able to withstand the raging waters sufficiently.

When it was founded in 1972 there were 723 students. The principal is Hanne Leth Andersen.

The university offers Bachelor , Magister and Ph. D. degrees , is divided into four institutes and occupies around 50 buildings. Most bachelor programs and some master’s programs can also be studied in English.

The building of the University Library (RUb) was designed by the architect Henning Larsen and extends over several levels over an area of ​​7600 m². 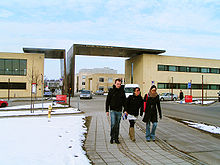 Entrance to the University of Roskilde 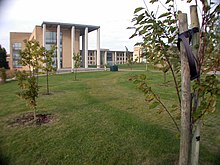 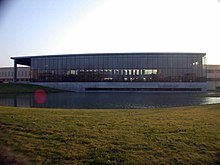 The university was founded with the aim of doing academic teaching in a new, alternative way, which should deliberately differentiate itself in many points from the traditional practice of imparting knowledge in the style of frontal teaching . a. by involving the student to a high degree with a high degree of personal responsibility in all activities. The basic principles here are:

There are four institutes:

There was also a research center for women's rights (2002-):