The VfB Leipzig (VfB: Association for movement games) was a sports club. The men became German football champions three times at the beginning of the 20th century and were German record champions for over 23 years until 1925 , before they were replaced by 1. FC Nürnberg .

On November 11, 1893, Johannes Kirmse and Albert Rößler founded the Sportbrüder Leipzig and about three years later Theodor Schöffler initiated the establishment of VfB Leipzig . On May 13, 1896, the association was founded in Boden's German drinking room . VfB played its first game on July 5, 1896, which was won 3-1 on the Lindenau sports field against Leipzig BC 1893 .

These two football clubs merged in 1898 to form VfB Sportbrüder 1893 Leipzig and under these names were founding members of the German Football Association in 1900 . They were represented by Johannes Kirmse at the founding meeting in the Leipzig restaurant  Zum Mariengarten . In addition to the VfB Sportbrüder 1893 Leipzig, the Leipzig clubs Leipziger BC 1893 , FC Lipsia 1893 Leipzig , BV Olympia 1896 Leipzig and FC Wacker 1895 Leipzig were founding members of the DFB. In the same year, the club put the addition Sportbrüder and entered under the name VfB Leipzig .

From 1900 on, footballing performance exploded under the leadership of the ambitious coach and player Theodor Schöffler , who placed great emphasis on stamina and playing ability. In the 1902/03 season, the VfB was the first time within the Association of Leipzig Ball Game Clubs (VLBV) Leipziger Gaumeister. This qualified him for the second final in the Association of Central German Ball Game Clubs (VMBV) , in which clubs from today's federal states of Saxony , Saxony-Anhalt and Thuringia participated. After the smooth 4-0 win in the final against Dresdner SC , VfB were Central German champions and thus qualified for the DFB's first ever final tournament , the so-called national games. Despite the hard blow of fate (mentor, trainer and main character Theodor Schöffler died in March) the people of Leipzig were in top shape. After victories over Britannia 92 Berlin (3: 1) and Altona 93 (6: 3), VfB reached the final on May 31. He won the final in Altona 7-2 against DFC Prague . VfB Leipzig was thus German champion in 1903 and was the first club in DFB history to hold the Victoria Cup in their hands.

The first championship team in Germany, 1903

VfB Leipzig was now among the absolute top performers in German football. In the twelve years up to the First World War in 1914, he always qualified for the strong final round of the Central German Championship and nine times for the DFB finals. The DFB final round was only missed three times: in 1909 for organizational reasons and in 1908 and 1912 for sporting reasons. During the eight DFB finals (in 1905 the right to play was not exercised for reasons of cost), VfB Leipzig made it to the final six times, becoming German champions three times ( 1903 , 1906 and 1913 ) and three more times German runner-up ( 1904 , 1911 and 1914) ).

With the beginning of the First World War in 1914, gaming was suspended throughout the German Empire. Of the 586 VfB club members, 245 were deployed in the war. Four players from the championship eleven died in 1913. During the war, only regional championships were played. In 1918, VfB became Central German champions for the eighth time. 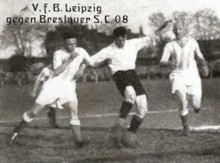 The reconstruction of a team that was just as successful as in the prewar period did not succeed. Sporting successes were only sporadic. The move to the new VfB stadium in 1922 brought new attendance records for games for the Leipzig Gaume Championship, but the footballing performance remained mediocre. You were five more times Leipzig Gaumeister and three times Central German master.

As Central German runner-up in 1933, VfB qualified for the Gauliga Sachsen . That was the top division in the game system introduced by the National Socialists in 1933. The time until 1944 was without shine, VfB mostly played in midfield or against relegation. In 1944 the blue-whites landed in last place in the Saxon Gauliga, but this remained without consequences, as the following season 1944/45 was no longer played due to the travel restrictions introduced in December 1944. The VfB footballers only caused a stir once during this period: in 1936 the team reached the second DFB or Tschammer Cup final . Seven clubs had to be defeated on the way, including four reigning Gaumeister. Because of the Olympic Games in Berlin in 1936, there were delays in the schedule, which made it possible for the 36 finals to be held at the beginning of 1937. In a legendary final on January 3, 1937, VfB defeated the then overpowering FC Schalke 04 at the Olympiastadion Berlin in front of 70,000 spectators (including 4,000 fans from Leipzig) 2-1.

Dissolution in 1945 and successor associations

After the Second World War , all East German sports clubs were permanently banned at the instigation of the Soviet occupying power on the basis of Directive No. 23 of the Allied Control Council , so that VfB Leipzig ceased to exist.

In the spring of 1946 the SG Probstheida was founded in the same place, among others by former VfB players. Until 1963 the association was renamed several times (BSG Erich Zeigner Probstheida, BSG Einheit Ost, SC Rotation Leipzig ). After the merger of SC Rotation and SC Lokomotive in 1963, SC Leipzig played there and, from 1966, its successor 1. FC Lokomotive Leipzig , which is thus the successor club of VfB.

In the course of the political changes in the GDR in 1989/90, new structures were necessary in competitive sports. Many clubs changed their GDR name through modification (e.g. SG Dynamo Dresden ) or took over their old names from the time before 1945. VfB Leipzig (1991) emerged from the structures of 1. FC Lokomotive Leipzig. The choice of name was based on the successes of VfB Leipzig in 1893 and the fact that in 1946 former members of VfB Leipzig from 1893 found a new home at the locomotive predecessor SG Probstheida.

In addition to these three sports, cricket, ice hockey, fistball, field handball, hockey, batting and bowling were also offered. In the 1920s, a mountain sports and skiing department was also formed. At the time of National Socialism, there was also a military sports department in the coordinated VfB, in which all 16 to 26-year-olds had to regularly take part in off-road exercises. It was founded by the association's chairman, Fricke, who was a member of the NSDAP.

In 1905 the athletics department of VfB Leipzig achieved a respectable success. With Martin Beckmann , VfB was the first Leipzig sports club to have a German athletics champion. On July 16, he won the 400-meter run of the German Athletics Championships , which was carried out in Mulhouse in Alsace . In the same year Reinhold Friedrich was able to win the German championship title in discus throw in Leipzig on July 23.

VfB was very successful in swimming for three years. With the transfer of the two Leipzig clubs, 1st Leipzig Swimming Club and Leipzig Women's Swimming Club to VfB in 1923, VfB athletes won almost a dozen German championship titles. In 1926 the paths parted again.

Heinrich Schomburgk , who won the German championship title with the soccer department of VfB Leipzig in 1906, was also active as a tennis player at Leipziger SC . He was German champion in men's singles, men's doubles and mixed teams. He also took part in the 1912 Olympic Games in Stockholm . In the men's singles on the open court, he was eliminated in the round of 16 against South African Harold Kitson . In mixed doubles on the open court, he reached the final together with Dora Köring and defeated the Swedish team consisting of Sigrid Fick and Gunnar Setterwall . This victory made Heinrich Schomburgk the first Leipzig Olympic champion.