Restaurant Zum Mariengarten in Leipzig (around 1905)

The founding assembly of the German Football Association took place as “I. General German Football Day ”took place on January 28, 1900 in the Leipzig restaurant Zum Mariengarten . The aim of this event was to create an umbrella organization for the football associations and clubs in Germany that had been established by then in order to ensure uniform rules and the implementation of national championships and international encounters. It led to the founding of what is now the world's largest individual sports association, the German Football Association (DFB). 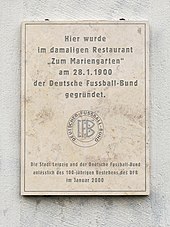 Reminder plaque for the foundation of the DFB

The football in Germany was the end of the 1880s gradually popular and spread to the end of the 19th century in various cities of the German Empire. The first associations were founded primarily in Berlin, and calls for a nationwide organization of football competitions were soon loud. The initial claim to sole representation of the Berlin associations Bund Deutscher Fußballplayer (1890), Deutscher Fußball- und Cricket Bund (1891) and the Verband Deutscher Ballspielvereine (1897) met with resistance, especially in southern Germany, so that until the end of the 19th century due to the Rivalries neither nationwide championships nor official international comparisons could be organized. At that time there was also a lack of uniform rules and appropriate training for referees. The insight that a nationwide umbrella organization was needed was there, but various attempts and calls to found such an organization had failed by the turn of the century.

On the fringes of the “General German Sports Festival”, which took place in Leipzig in July 1899, some representatives of the Leipzig Ball Game Association as well as visitors from outside Germany met for a brief discussion. The topic was the organization of a "general German football day" at which the founding of a German football association was to be decided. This was to take place in Leipzig in September, but the event did not take place. After the games played in Berlin and Karlsruhe in November 1899 (three of the later so-called original international matches ) between German and English national teams had another dispute over the responsibilities and competencies for the organization of international matches, the chairman of the Leipzig Football Association took action, Johannes Kirmse , the initiative and published the following announcement in the "Deutsche Sportnachrichten" on January 4, 1900:

Taking into account the approvals and requests we received from all parts of Germany, we have decided to convene the 1st General German Football Day for Saturday, January 27th and Sunday, January 28th, in Leipzig, Mariengarten, Carlstrasse. Agenda: whether and how is it possible for all German football clubs to reach an agreement? Every German soccer club or association is entitled to vote. Each association has as many votes as there are members.
The committee to convene the first general German football day in Leipzig.
Signed JE Kirmse, chairman.

On January 22nd, the exact process was announced as follows: The III. The election meeting of the German Sports Authority for Athletics takes place on the evening of January 27th and the First General German Football Day on the following day.

On January 28th at 10:40 am, Johannes Kirmse opened the “First General German Football Day” as host and chairman. The 36 participants consisted mainly of the first generation of players who had become acquainted with football as high school students or students in the 1890s and who were between 25 and 30 years old at that time; At the age of 47, Ferdinand Hueppe from DFC Prague was the oldest among them. They represented a total of 86 clubs at this conference. The clubs represented also included two German clubs from Prague ( DFC and Germania ), which at the time belonged to Austria-Hungary . At the request of the Verband Deutscher Ballspielvereine (VDB), this circumstance led to an initial controversy about whether only imperial German clubs and associations should be allowed; In the end, however, the majority favored the participation of all clubs with 69 votes against 16 (with one abstention).

The only item on the agenda afterwards was: "Whether and how is an agreement of all German football associations and clubs possible?" And the initiators believe that the following points are in the foreground in order to solve this question:

However, many present wanted to see an association founded that day, so that a heated discussion broke out around this question. While the Hamburg representative Walter Sommermeier saw the right moment for the founding, Fritz Boxhammer , chairman of the VDB and thus a representative of numerous Berlin associations, considered it premature and announced that the associations he represented would adopt the resolutions of the first general German Football days would not easily be regarded as binding. Initially, he only expects the establishment of uniform rules of the game as a positive result of Football Day. Even Walther Bensemann , who was known more for his brisk approach than for restraint, was of the opinion that the prerequisites for founding an association were uniform game and referee rules and the strengthening of local associations. Johannes Kirmse again suggested the establishment of a commission to prepare a foundation. As with earlier attempts, the establishment of a nationwide association seemed to have been postponed indefinitely.

However, after Gustav Manning had once again pointed out the intention of Football Day to “take final action” and Walter Sommermeier appealed to the delegates' patriotism with the memory of the founding of the empire in 1870/71, the following motion was made shortly before lunch break: “Signed apply for the establishment of a general German football association by today's assembly. Fred Manning, Sommermeier, Hueppe, Wamser. “The result of the vote was 64 against 22 votes in favor of the immediate establishment of the association. Johannes Kirmse then announced "to thunderous applause" that the German Football Association had been constituted.

Demmler (Berlin) wanted the game of cricket to be considered on behalf of the new association. Brandeis (Prague) suggests the name General German Football Association. Ultimately, at the suggestion of Bensemann (Karlsruhe / Mannheim), the name Deutscher Fußball-Bund was adopted.

The legality of this ad hoc establishment of the federal government was, however, controversial, especially since not all persons present considered themselves authorized to make this far-reaching decision for the associations whose voting rights they had to exercise. Boxhammer and other opponents of the foundation protested after the lunch break, and Kurt Doerry got to the heart of the situation by asking who is now, the German Football Association or the German Football Day. Despite the protests, facts have already been created by the declaration of membership of the representatives of 60 clubs for the new association.

The DFB joined immediately: The member clubs of the Hamburg-Altonaer Fußball-Bund (8), the Süddeutscher Verband (7 and 8 with the Freiburg FC), the Berlin German Football and Cricket Association (4) and the clubs of the host Leipzig Association (5), each of which appeared separately, as well as 29 individual clubs, including the Freiburg FC. Since this cannot be counted twice, there are a total of 53 immediate accessions. Six clubs from Frankfurt am Main and Hanau, as well as Germania 88 (Berlin) joined with reservations.

The clubs of the Bremen Association (7) remain outside for the time being, as their representative Sommermeier believed that they did not have such a far-reaching mandate. Eleven clubs of the Berlin VDB did not join until June 17 of the same year, and the six Mannheim and Karlsruhe clubs represented by Bensemann as well as two other Berlin individual clubs (Favorit and Fortuna) also followed later.

The first emblem of the DFB

Despite the differences of opinion among the participants and the organizational and formal inadequacies, the founding meeting in Leipzig turned out to be the hoped-for spark for football in Germany. In 1900, the second (in Erfurt) and third Bundestag (in Frankfurt am Main) two further meetings took place. Binding football rules were laid down on them and Ferdinand Hueppe was elected first chairman of the DFB. At the time of the third Bundestag in October 1900, the DFB had 91 clubs.

The DFB's aim to host a German football championship initially failed because of the regional associations, some of which were older and only partially prepared to share their power with the younger federal association. The first round of the championship came about a good three years after the DFB was founded; it was played in 1902/03 .

After joining FIFA in 1904, under pressure from the DFB, the Prague clubs involved in its establishment, one of which had even participated in the first German championship, had to be excluded from the association. Ferdinand Hueppe from DFC Prague resigned from his position and was replaced by Friedrich Wilhelm Nohe . The first international match hosted by the DFB did not take place until 1908.